The Cairngorms are Calling

As we ride the bikes slower and slower uphill we could be a million miles from civilisation. We can see maybe 10 feet in front, the darkness is creeping upon us like smoke in the air, but still the climb continues up into light falling snow. A line of bike lights lead us ahead into the greyness. The Cairngorms were calling and I guess this is their answer.

Why do the mountains call us? Well the answer is different for all of us.  This story is about embracing those storms and battling the elements to follow a trail that winds deeper. it often feels like the mountains of Scotland are actively propelling you for daring to ride or walk upon them. In fact blizzards can occur in the Cairngorms any month of the year and at altitude it is the only place in the United Kingdom where snow lies from winter to winter. With no roads transecting the National Park, bikes are the best way to explore the network of ancient paths and tracks. 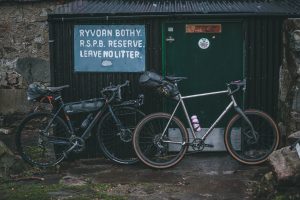 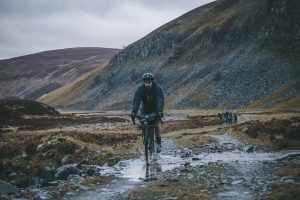 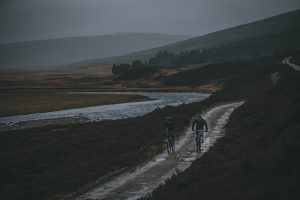 Despite it being the depth of winter we had struck it lucky for this mini adventure with no snow on the ground. It felt a bit like a bikepacking Oceans 11 as a crack team of biking talent was assembled. First up Russell Stout from Scottish adventure bike brand – Shand Cycles, Euan Camlin a photographer and ambassador for – Straight Cut Design, who ‘s so hard-core he wears shorts all winter. Lee Craigie a cycling legend, Ex Scottish XC Champion and Commonwealth Games athlete who  through The Adventure Syndicate and Cycletherapy aims to enable and inspire others  .Paul Errington, the UK’s gravel guru and among others 3T ambassador (and also quite fond of taking a dip in cold rivers), Neil Wilson a guide from OffTheGridMTB and a local to the area, then myself, Ed Shoote Regional Development Coordinator for DMBinS, photographer and blogger behind WeLoveMountains Finally the roster was complete with the amazingly talented Chris McLean who was to film the ride.

The aim was to complete a route from Aviemore over the mountains to Braemar and capture the true adventure of this spectacular corner of Scotland in a short film. This is a classic all weather route taking in primeval pine forests to panoramas of the Cairngorm Plateau where the shattered terrain is more like the high ground in high-arctic Canada or northern Norway.  Long known as perfect bikepacking territory we wanted to ride this dramatic part of the Cairngorms outer loop to inspire others to ride and visit.

“A gravel based ride? But can I bring my mountain bike?” Was Lee Craigie’s response as we unloaded vans after sunrise. Given the surface was mostly pretty smooth tracks and singletracks we expected to see the group on chunky drop bar bikes but instead a whole mix of loaded bikes appeared. The group inadvertently demonstrating it doesn’t matter what you ride. It’s more about being comfortable exploring new places and having adventures with the kit you have. What isn’t up for debate is being well prepared in the Cairngorms. Even if snow wasn’t on the forecast we had enough experience to know that you need that extra layer and those spare lights too! But for once we didn’t need camping kit , despite all of us used to a bivvy bag under the stars, instead we’d arranged a unique overnight stay in possibly the quirkiest building in Scotland – Marr lodge. This National Trust Scotland, former Victorian Hunting Lodge stands out against the mountains with an air of history and probably its fair share of ghosts, certainly some Victorian deer must haunt the wood panel corridors. Put simply after a challenging day riding, it made a bizarre overnighter with only a few 100 stags heads to keep us company.  The ‘ballroom’ alone hosts 2400 stags heads which ironically, now, finds itself at the heart of a nature reserve! Camping is great but staying somewhere that you’ll be telling your mates about for years is so much better. 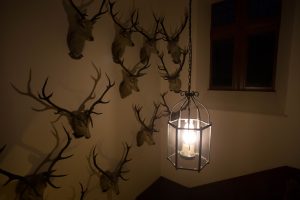 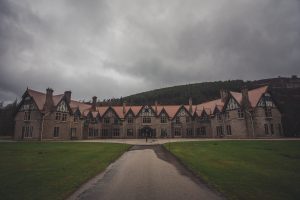 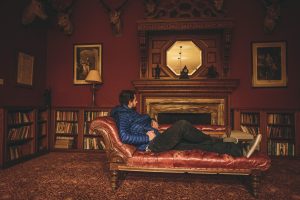 Setting out from Aviemore the rain started from the off and the warm glowing windows of a luxury hunting mansion felt a long way off. We knew it wasn’t going to be an easy first day but also itwould  be something we’d remember. Although given the constant clink of hidden hip flasks that so many ‘experienced’ bikepackers bring , it might not be such a certainty that anything would be remembered at all! ……  Sit back, turn up the sound and watch the film to be inspired for your next adventure.