Bikepacking, also known as bike touring or cycle camping, is becoming increasingly popular among cyclists with an adventurous streak. Despite this recent rise in popularity, however, this mode of travel has actually been around as long as the bicycle itself. We catch up with one of your komoot pioneers, Brenda, who has been packing up her bike and setting off with her home-made tent and family for the past 60 years. 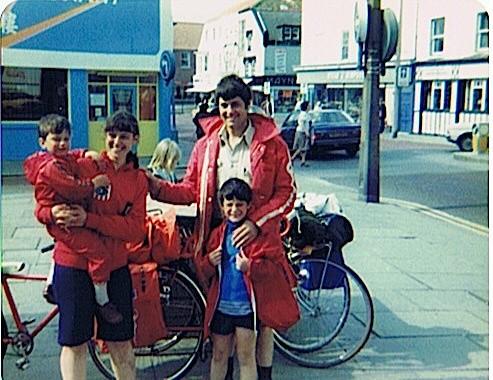 “It all started around 1954. I know it was about that time as there were still some items on rationing. My father was demobbed from the Signals Corp after WW2 and came home to restart his life. He started a small cycle repair shop and had a single car as a taxi. Things were very tight and he used many parts to build up my first self -propelled vehicle a three-wheeled tricycle. I was so excited, I remember being unable to wait for the paint to dry, so with wet, blue paint I jumped on and pedaled to the local shop feeling so proud.

Sometime later, he was repairing what was known as a fairy cycle and he tried me on it. I rode that two wheeled red beauty immediately without any problems. This prompted him to buy me a beautiful blue Royal Enfield bicycle — complete with rod brakes and single speed. It was far too big for me. My parents always bought everything so I would grow into it.

So after many false starts, I finally grew into it and away I went. This was my taste of freedom at about age 7 and I cycled all over the local area. Passing the 11+ exam resulted in me receiving another new bicycle – again blue, with a 3 speed Sturmey Archer gear hub. What a revelation, I could change the gears and ride up hills with much more ease.

I was awaiting my ‘O’ level results (now A levels) when I had my first cycle tour with a school friend, roaming over the Durham County hills and dales. The roads were fairly car-free back then, but there were also no dedicated cycle routes either. We stayed in youth hostels – back then these required no advance booking and you were asked to complete chores before leaving. Very unlike today’s almost hotel like facilities.

Fast forward a few years and I’m a young, married woman with a baby. It’s 1974 — a year which saw the UK enter an oil crisis resulting in petrol coupons being issued but never used. This prompted us to invest in bicycles, mine complete with a fold-down seat for baby. There were no head supports on these seats unlike the beautifully made seats and trailers now available. We weren’t put off, though, and bought a trailer base and affixed a wooden box to pull our young sons about. After our children out-grew this contraption, we used it for years to carry our camping gear. 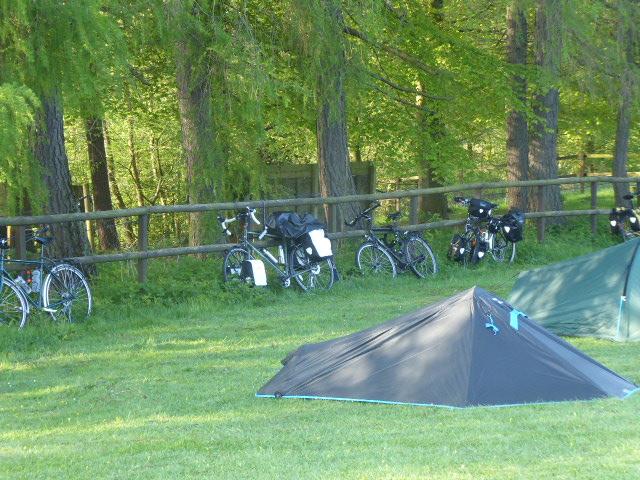 Our first cycle camping trip with the children was to the CTC (cycle touring club) York Cycle rally and home. My husband had found an old bike and cut off the front forks, attaching it to his bike with a frame. This was a homemade version of what is now known as a trailer bike. We did eventually get a 1935 Freddie Grubb trailer bike – single speed.

We carried on cycle camping and Grandma came too. We used the train to get to the area we wanted to explore. In those days (early 1980s) we could take a tandem with trailer bike attached, 2 bicycles and a box trailer filled with camping gear – there used to be a guard van (a small carriage which the guard travels in and assists with the braking and slowing down the train) that the whole lot could be loaded on to. 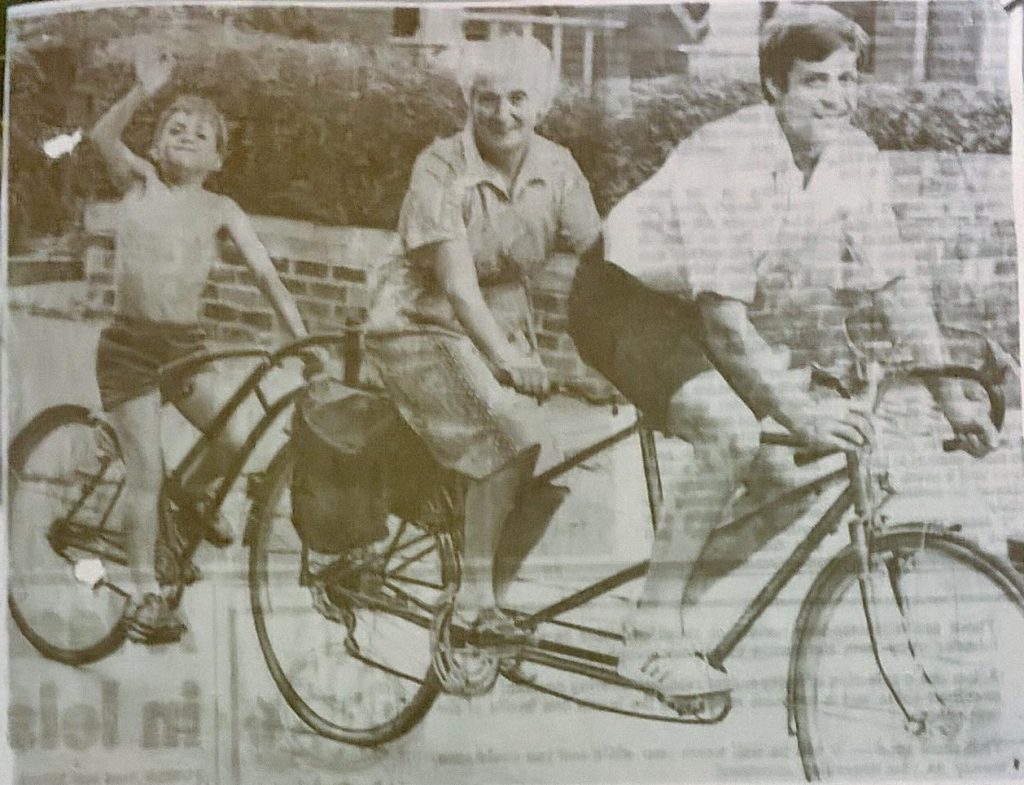 This photo was taken by the local paper and we don’t have a proper copy but this is how we rolled. We also took the long train journey to Cornwall in 1982 and cycled 360 miles in 10 days before having to get back home as a summer storm rolled across the country causing extensive flooding. Even though we weren’t booked to travel, good old British rail got us home, re-routing us on 7 trains in 24 hours. We were even guided through Birmingham station by the station master. All went well until we came to a halt at midnight on York station due to a rail strike – they haven’t changed much. I unpacked the sleeping bags and we slept until the mail train came in at 5 am, which whisked us home. These were happy days but they came to an end when we discovered kayaking and spent the next twenty plus years kayak camping in the UK and Poland. 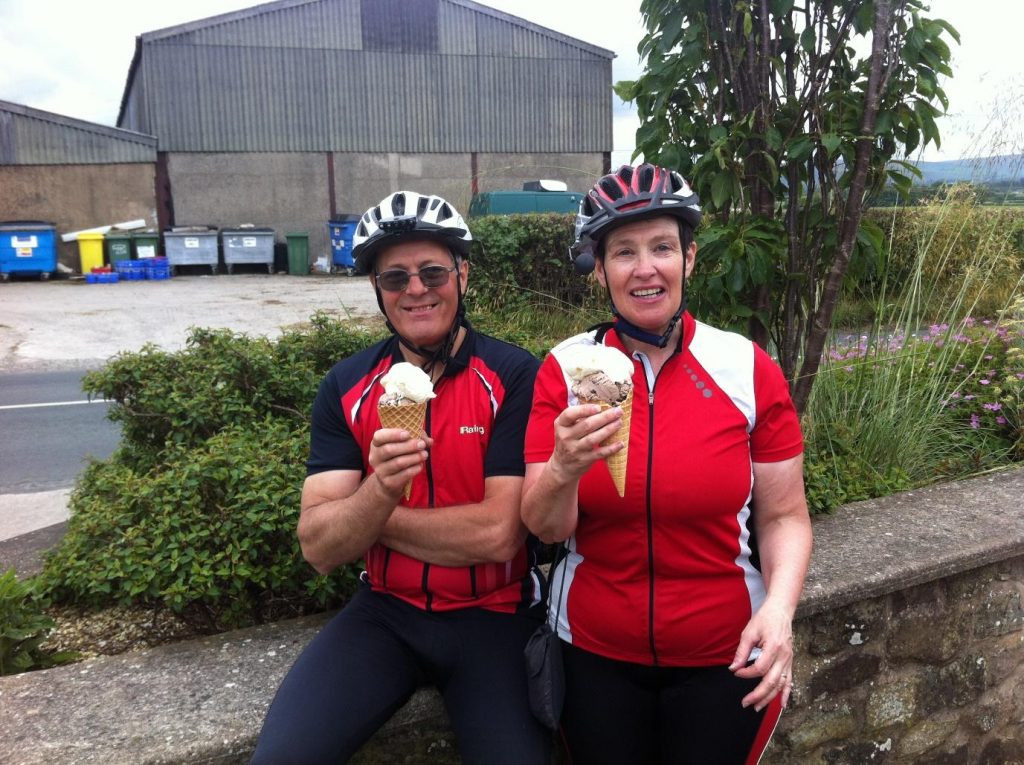 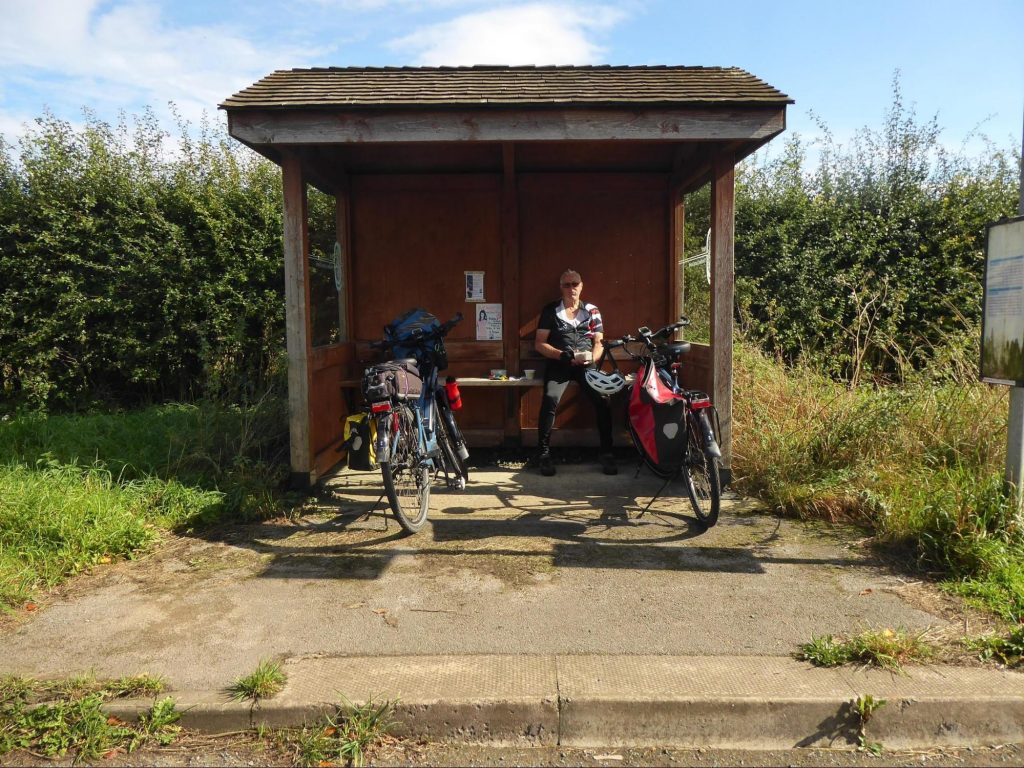 In 2004, a detached retina saw me unable to go on a kayak trip and my husband suggested that I ride on the back of the tandem. We headed off to ride the Coast and Castles route to Edinburgh and came back via Keilder. The old love of cycle camping was re-kindled and I found out about the North Sea Cycle route. An idea was borne. So, in 2006 we took some time out to cycle and camp through seven European countries — and I am so glad we did. The ferries were then traveling between Norway and Shetland, so we were able to ride just short of 3000 miles in 9 weeks. It restored our faith in humanity being helped along the way by other cyclists when we lost the way and being helped to find accommodation – we didn’t camp in really bad weather.

So, we have cycled in the UK and Europe many times since then. We discovered the Cycle Touring Festival held in Clitheroe each May and knew we had found ‘our tribe’. 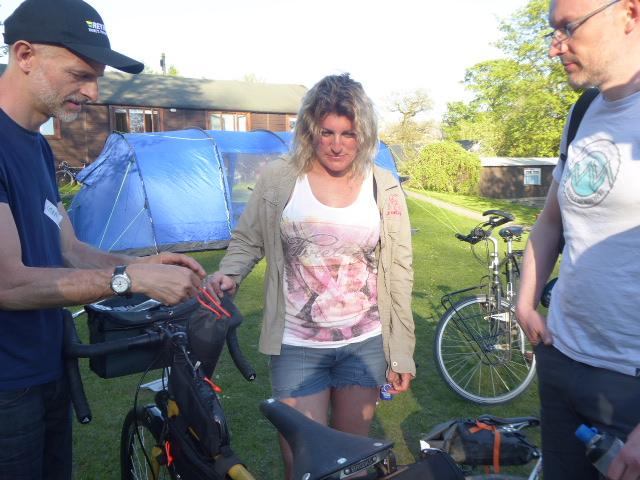 We now have folding bikes and a super Dutch made Radical designs trailer. This allowed us to travel up to and ride around parts of the Orkney Isles that we haven’t been to previously. I also have the confidence to go off on solo cycle camping trips with the added reassurance of an OAP bus pass, knowing if it gets too hard, I can jump on a bus. 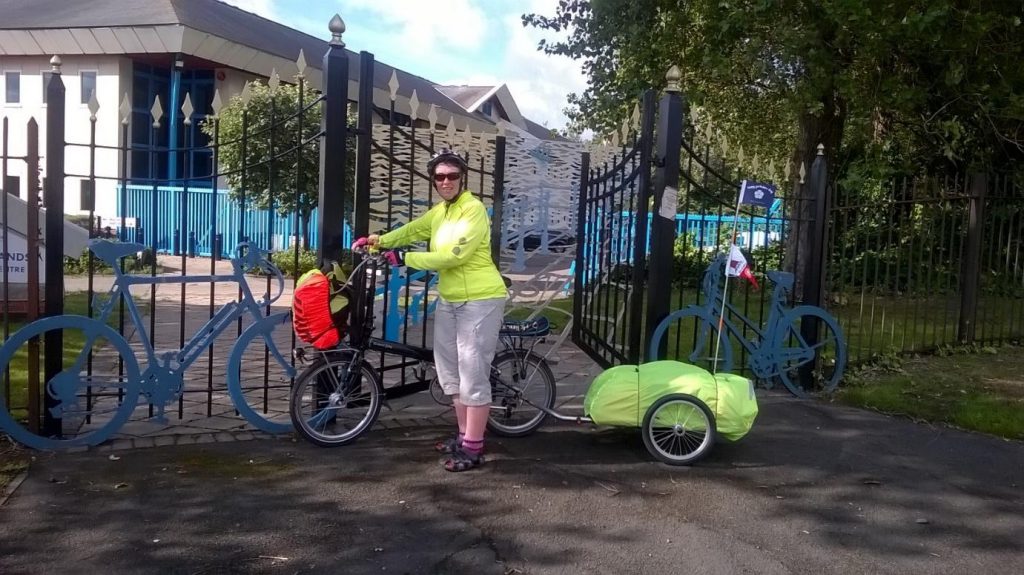 This past year has seen us purchase Koga World Traveller e-bikes and we hope to continue to cycle camp for many years to come. Another modification to our trips is the introduction of komoot to our route planning (we were shown the app by one of our sons who is much more tech savvy). We still like to carry a good old paper copy but komoot has added a new dimension to our planning adding ease, spontaneity and providing a platform in which to store our memories: photos, routes and Highlights that we find along the way.

One thing that hasn’t changed is that cycling in whatever decade brings its joys, happiness and unites us as a family unit.

You can tap into Brenda’s years of local knowledge and experience by following her adventures here on komoot.

She is currently planning her annual Easter trip.