For his 50th birthday, komoot Pioneer Beat embarked on a very special bike adventure: a full circumnavigation of the Matterhorn by bike. One of the highest and most renowned mountains in the Alps (think of Toblerone chocolate), it’s surrounded on all sides by incredible panoramic views and the finest trails — ready for all those who cannot be stopped by high Alpine challenges and stretches. 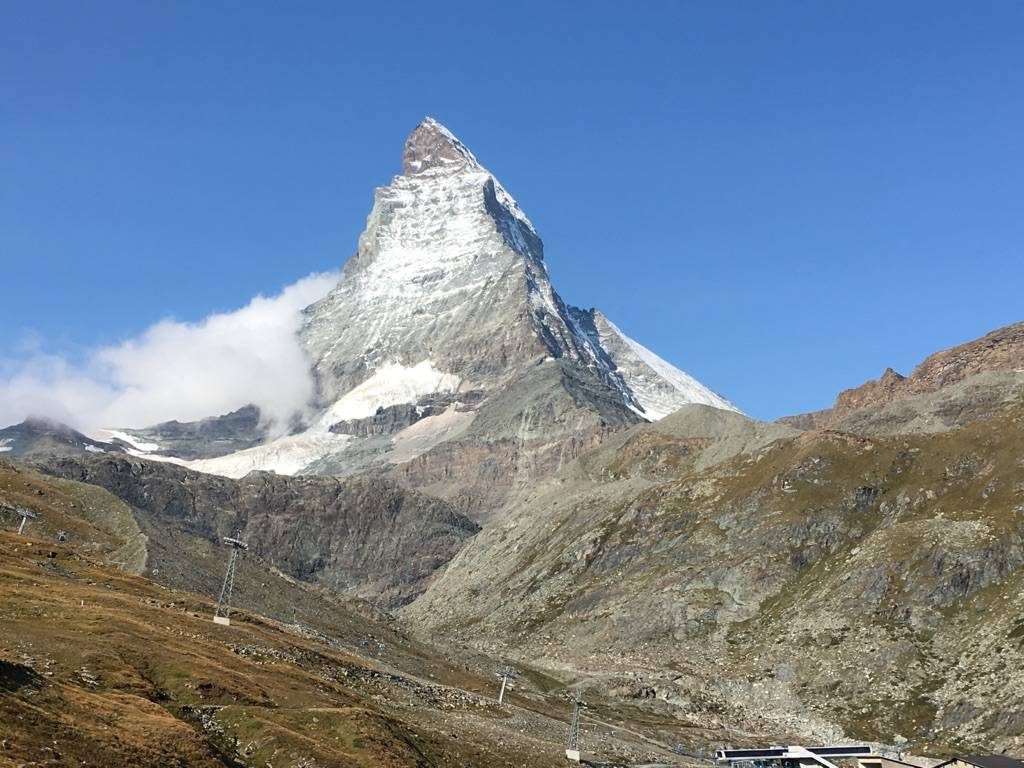 “For my birthday I wanted to give myself an adventurous present: a guided mountain biking trip right around the Matterhorn. But I didn’t want just to circumvent it in full; I wanted to do it in 7 days. Which is no mean feat considering that we’d have to ride over 211 miles (340 kilometers) and conquer over 42,000 feet (13,000 meters) in elevation to do so.  Unfortunately, however, the first disappointment came early on: the tour was canceled due to a lack of people signing up. I was so disappointed — and not alone: Two other members of the group also felt the same. After voicing my disappointment to the tour guide, he proposed a solution: I would take over the responsibility of organizing the group and become the ride’s guide. I’d been guiding my friends for years, after all, so I quickly got to work planning the route on komoot. Especially the single track scale in the map helped a lot to find the best trails for us.

Full of energy, I boarded the train to Visp on 3 September and got to know Bruno and Dani, the two other members of the trip in Bern on the way. 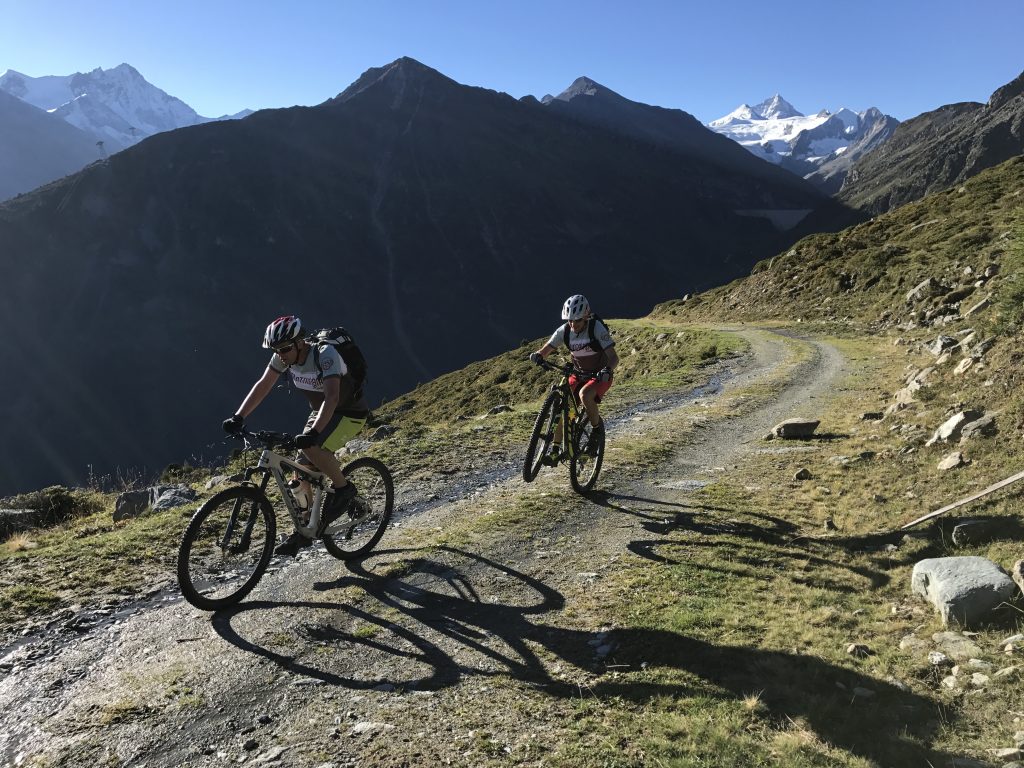 Fully loaded up with bikes and all our stuff, Silvio, who was responsible for transporting our luggage, immediately recognized us in Visp as “the crew”. We put our rucksacks into the bus and started the trip. I was so motivated! We rolled towards the Mattertal and soon saw the grandiose scenery with the striking Bietschhorn in the distance. But for the first ascents we had to conserve energy: the week ahead would challenge us with some steep ascents, offering plenty of time for us to get to know each other’s strengths and weaknesses. It was something new for me to go on a mountain bike holiday with ‘strangers’, but as is often the case when sharing such an adventure, we bonded quickly and got on very well. Together we rode along small paths towards Ergisch, which is the door to the Turtmanntal, another valley closer to the Matterhorn.

There we rested up  in a cozy chalet which had a hidden museum of bicycles in the cellar. The landlord was a retired cyclist and was delighted that we were stopping over on our trip.

The next morning we rode deeper and deeper into the Turtmannvalley. The Weisshorn was one of the first 13,000-feet (4000-meter) peaks we could see. Along Turmanna, we soon headed to Gruben, and from there it started to get really tough. From the upper Stafel at 7,657 feet (2,334 meters) we were pushing more than riding our bikes. At almost 10,000 feet (2,790 meters) we crossed the first real summit of our tour: the Meidpass. 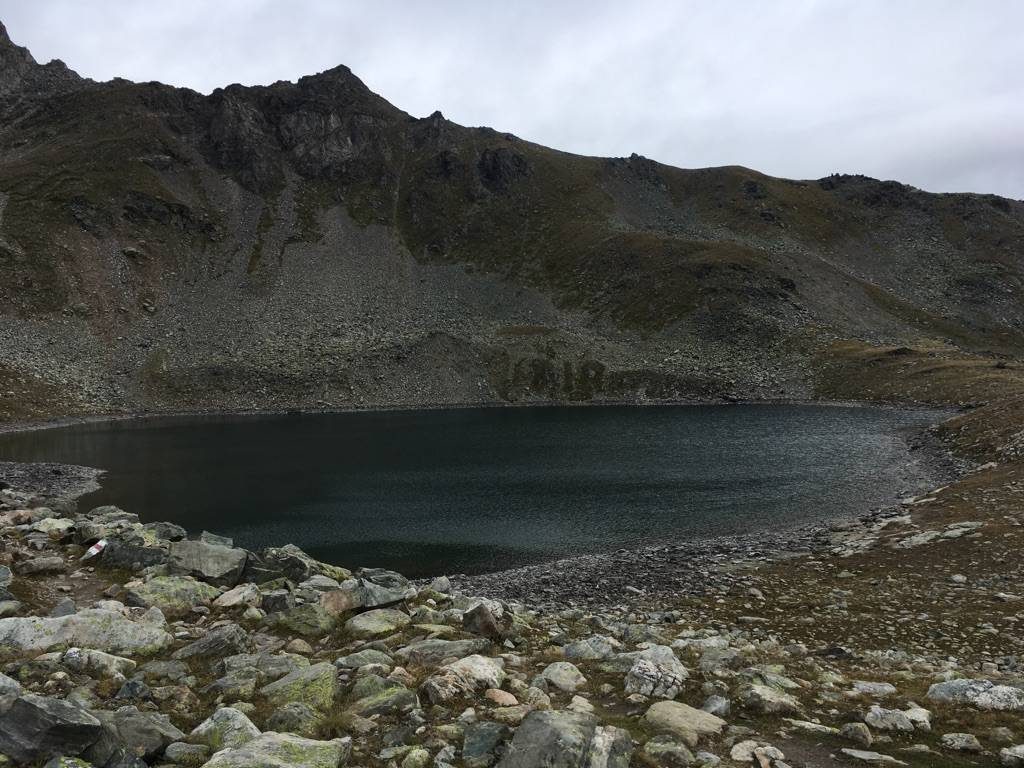 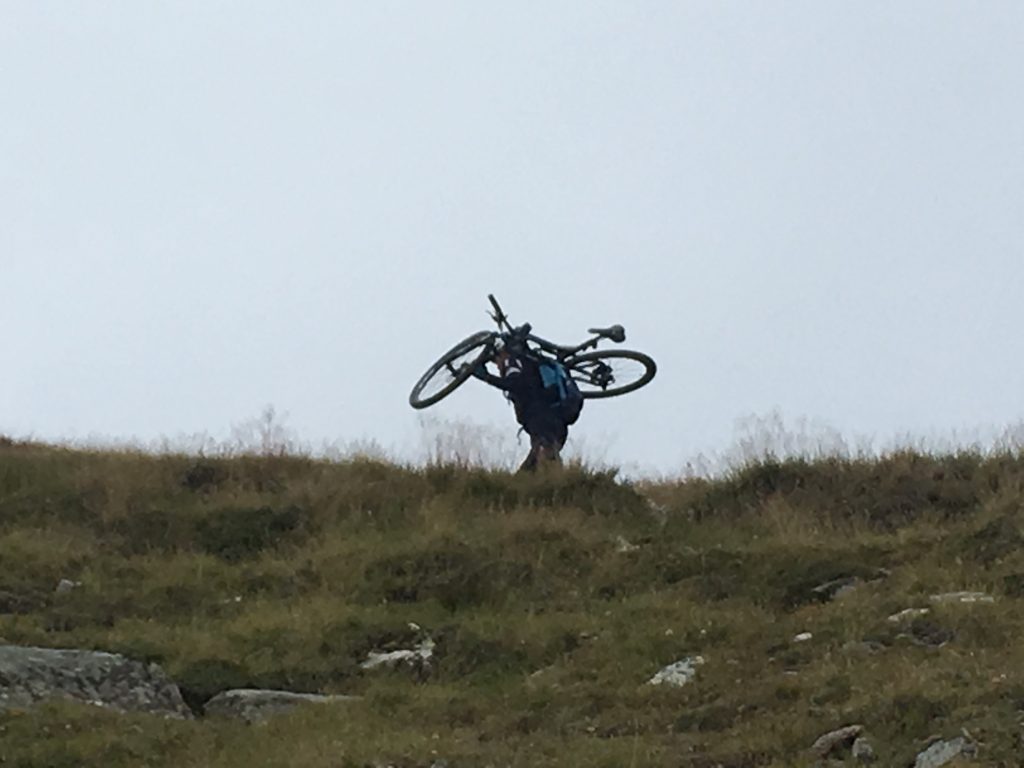 This was followed by a demanding descent to Alp le Chiesson. Over a great mountain trail we reached the Hotel Weisshorn. Our efforts were rewarded with an amazing descent on our way to Grimentz, a well-known ski resort, where we would stay that night. Grimentz is a really beautiful village, home to cozy little streets in the most amazingly idyllic Alpine setting.

With our starting point being at an altitude of 5,250 feet (1,600 meters), you can imagine that there wasn’t much of a warm-up. We got ‘straight to the point’ and rode the trails of the oldest cross-country marathon mtb course: the Grand Raid, which goes from Grimentz to Verbier. On a good gravel road we reached the Pas de Lona (9,143 feet/2,787 meters). The descent to Alp Vieille is dotted with singletracks interspersed with gravel paths, while the last section consists of an easy trail to Eison. After this time to recover we had to get the brain cells and finger muscles working again, because the following singletrack to Evonène was very tough and seemed to never end! 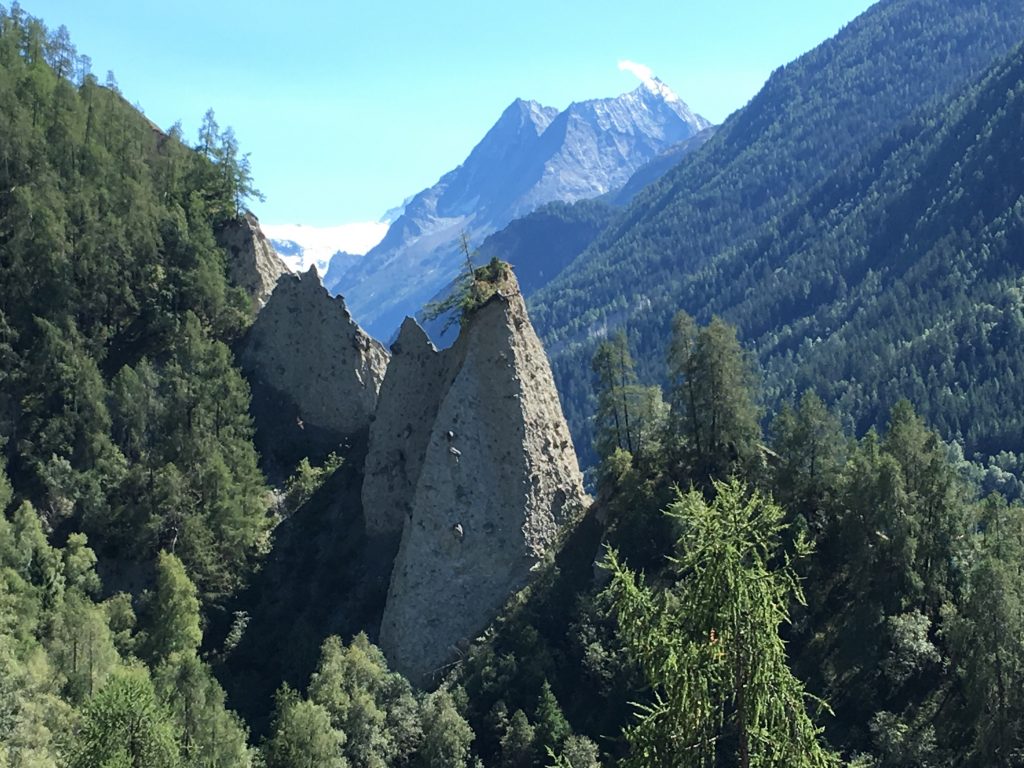 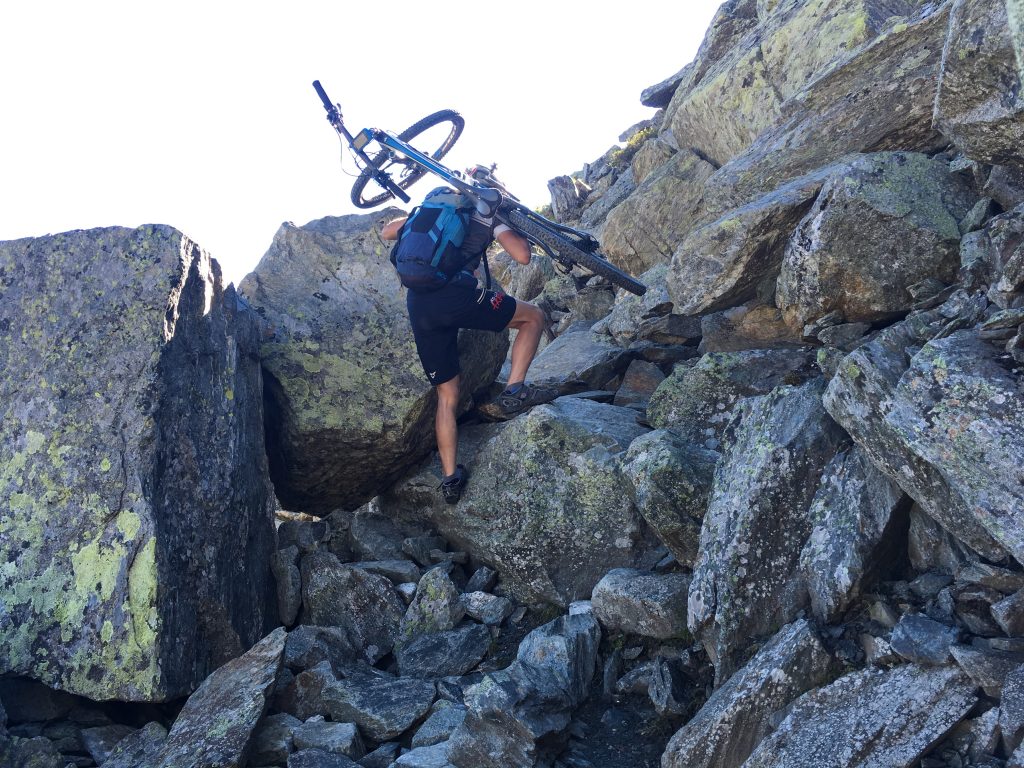 Again we started our day at a high altitude of 6,000 feet (1,800 meters). Via the mountain station Thyon we reached the Val de Nendaz. Via Haute Nendaz, which looked more like a ghost town in September, we again followed the unmistakable Trail to Pration. Above Verbier we reached the Croix de Coeur (7,129 feet/2,173 meters), the highest point of the day. Unfortunately, fog obscured what would have otherwise been a great view, so we quickly prepared ourselves to descend out of the damp cold and wind. 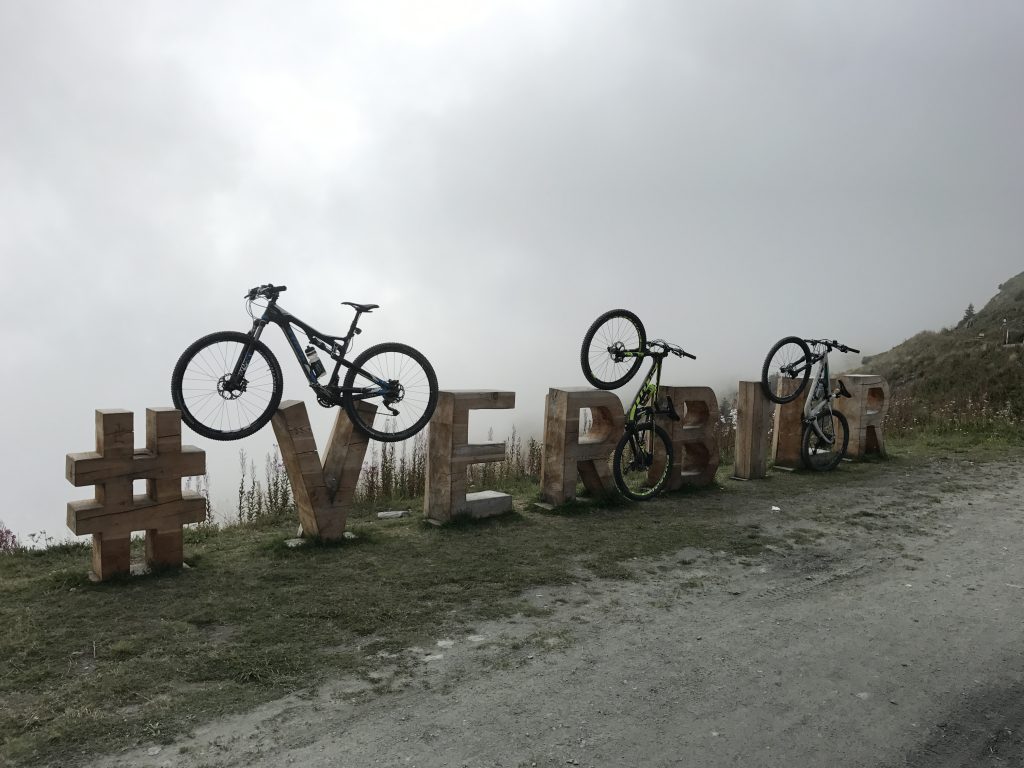 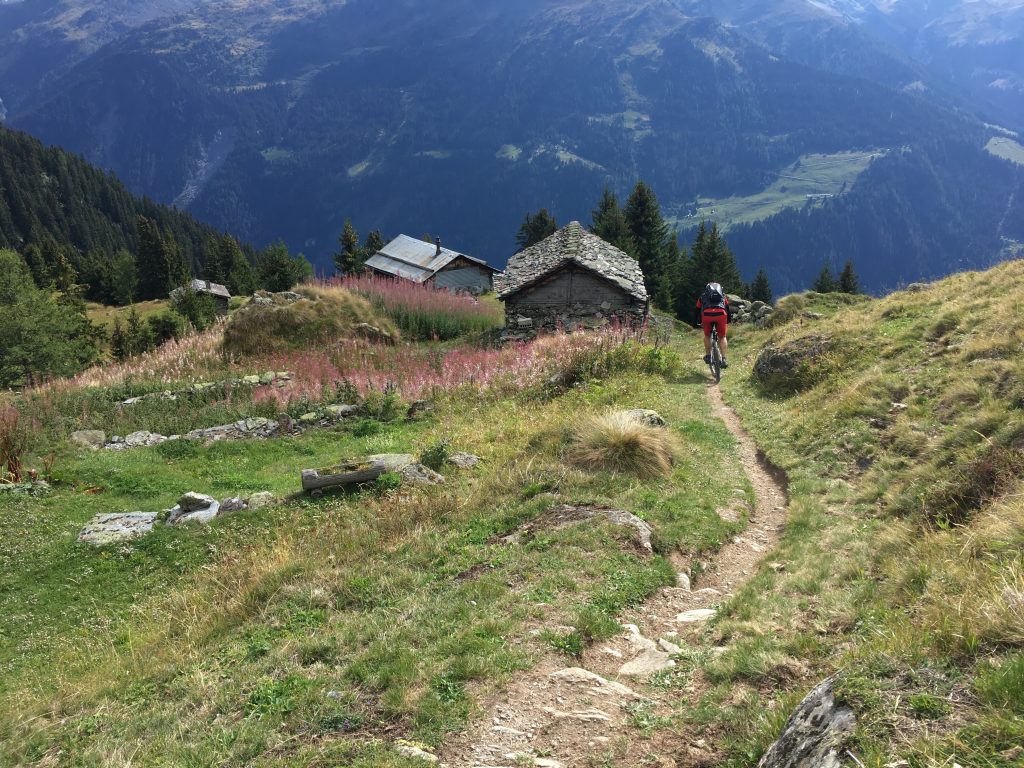 Changing into warm and dry clothes, we started the downhill via Verbier to Lourtier, followed by a final climb to Fionnay.

The last few days left their mark on all of us. Silvio suggested to take the bus to the dam for the first part, which proved to be a good decision as the long asphalt road would have turned out to be pretty monotonous.

Along the reservoir ‘Lac de Mauvoisin’, nature has created a breathtaking backdrop. At the end of the lake however, our beautiful views were punished with a very demanding ascent to the Fenêtre de Durand (9,176 feet/2,797 meters) to Alp Thoules. This climb was also more of a hike-a-bike stage rather than a true ride; but as soon as we reached the top, all the exertion was forgotten. Then began a very varied descent towards the Aosta Valley, dotted with many singletracks and rooted sections. 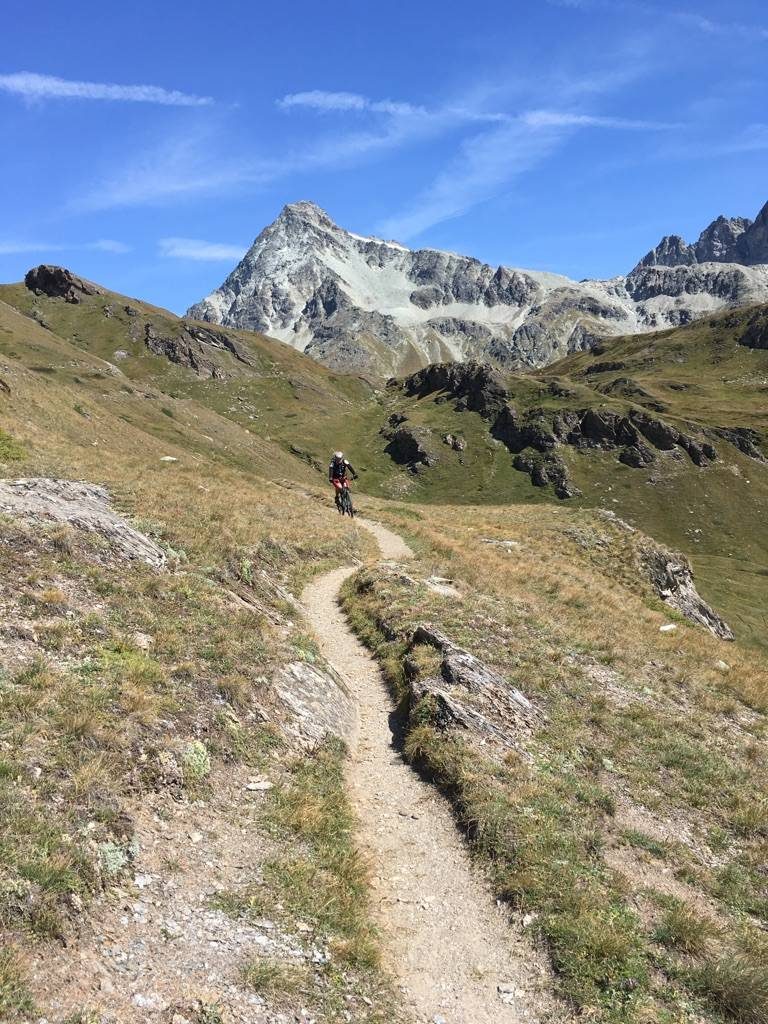 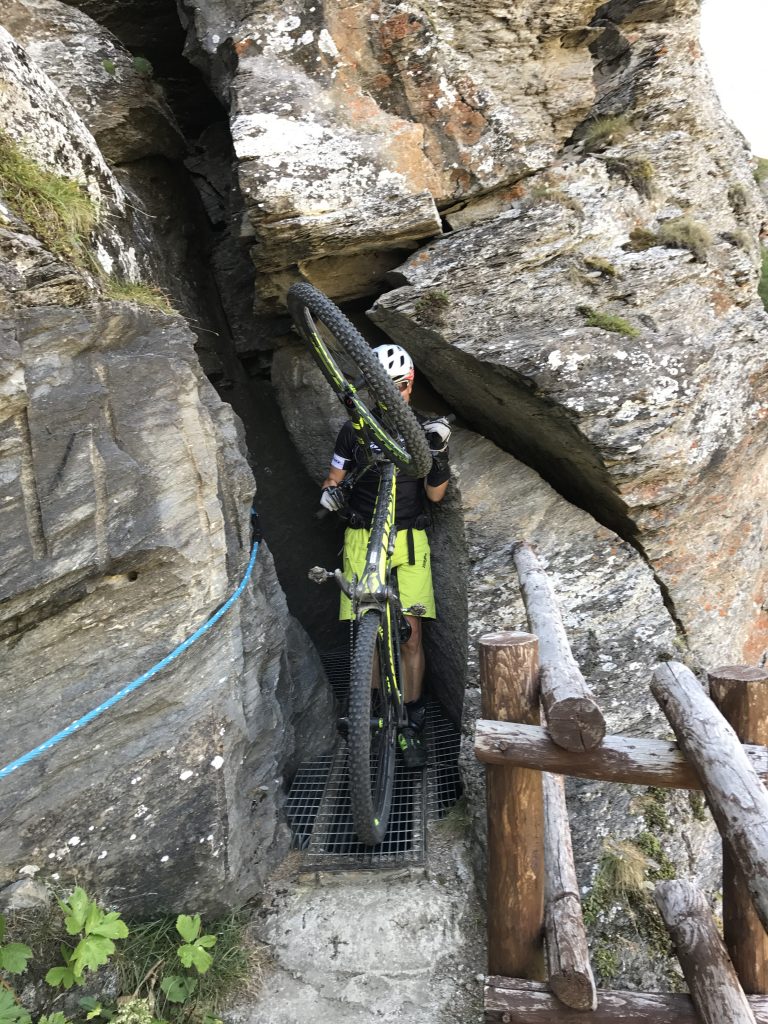 There were still two days left and with the last day, the Highlight of our trip would come. Unfortunately, however, a bad weather front was announced— not the best news for a crossing of the Theodulpass at a height of 11,000 feet (3,333 meters).  Therefore, we forged a new plan: we cancelled the tour through the Valle d’Aosta (the Italians might forgive us for that) and bridged the day with a shuttle directly to Cervinia. With this adapted plan we could still tackle the king stage without encountering bad weather. Christian from mountainbikereisen.ch organized the hotels for us, and gave us the green light for the change. So Silvio welcomed us in Aosta with the bus and drove us up to Cervinia.

Our 6th day started at 6,500 feet (2,000 meters) at the ungodly hour of 3.35 am. Less than an hour later, we were already in the saddle. Right before us we could see the world-famous pyramids of the Alps illuminated by the light of the stars. And with this, we started our final day. As we rode, the trails became steeper and the air became thinner. We changed again and again from pedalling to pushing mode. After nearly 6,000 feet (1,800 meters) of elevation gain an overwhelming panorama opened up at 11,000 feet (3,333 meters) on the Theodul Pass. It suddenly dawned on us: we were in the middle of a 13,000-feet-high (4,000 meters)peak in the Alps — and we got there by bike! Nowhere else in the whole Alps will you experience a panorama more impressive than this!

In front of us, we could see the Breithorn and behind us the Matterhorn. In addition, the sunrise overwhelmed us, which also slowly brought some warmth, but — as it was important that we drove through the glacier before it had time to thaw — there was no time to linger. If the snow became too soft, we would have needed to push the bikes during the 1.8-mile (3-kilometer) long descent; something we most definitely wanted to avoid. Satisfied with the descent and with overwhelmed with emotion, we reached the gondola station at Trockenen Steg. 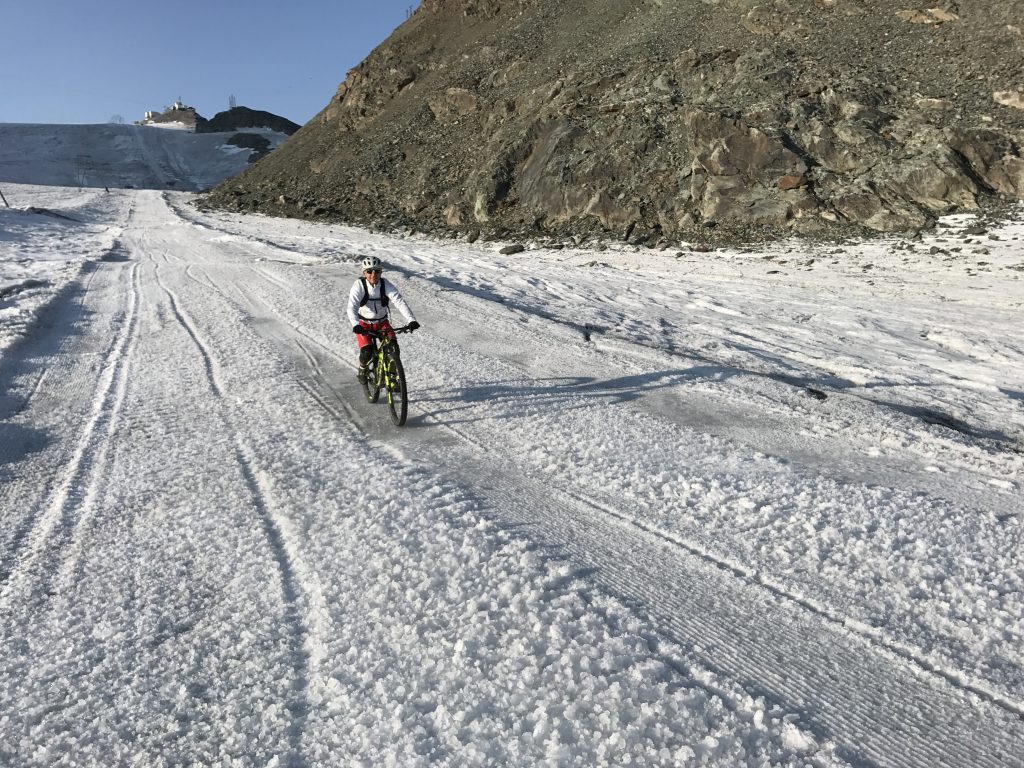 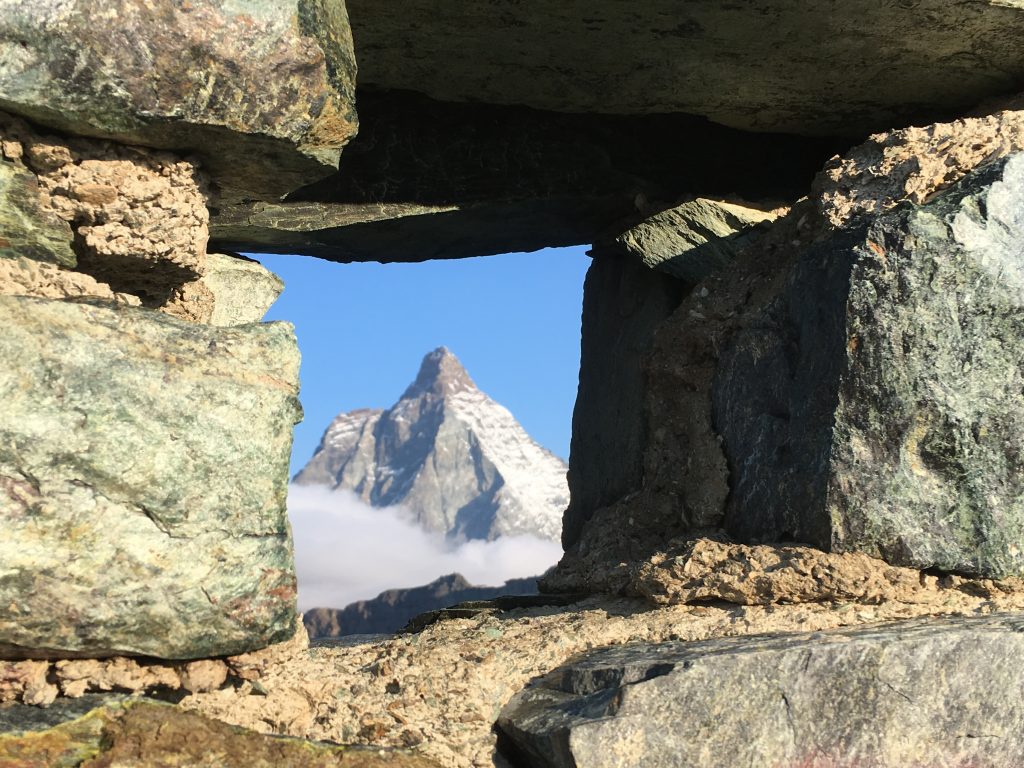 Here we took our first real break. We filled our water bladders and changed our clothes. On the following descents, the view became clear to Nordend, Dufourspitze, Signalkuppe and Lyskamm! We rode down to Zermatt on an endless trail. There we rewarded ourselves with a big piece of cake and just enjoyed the moment before we set off for the long descent to Visp. This last trail was the cherry on the cake of an unforgettable six days of riding. What an experience! 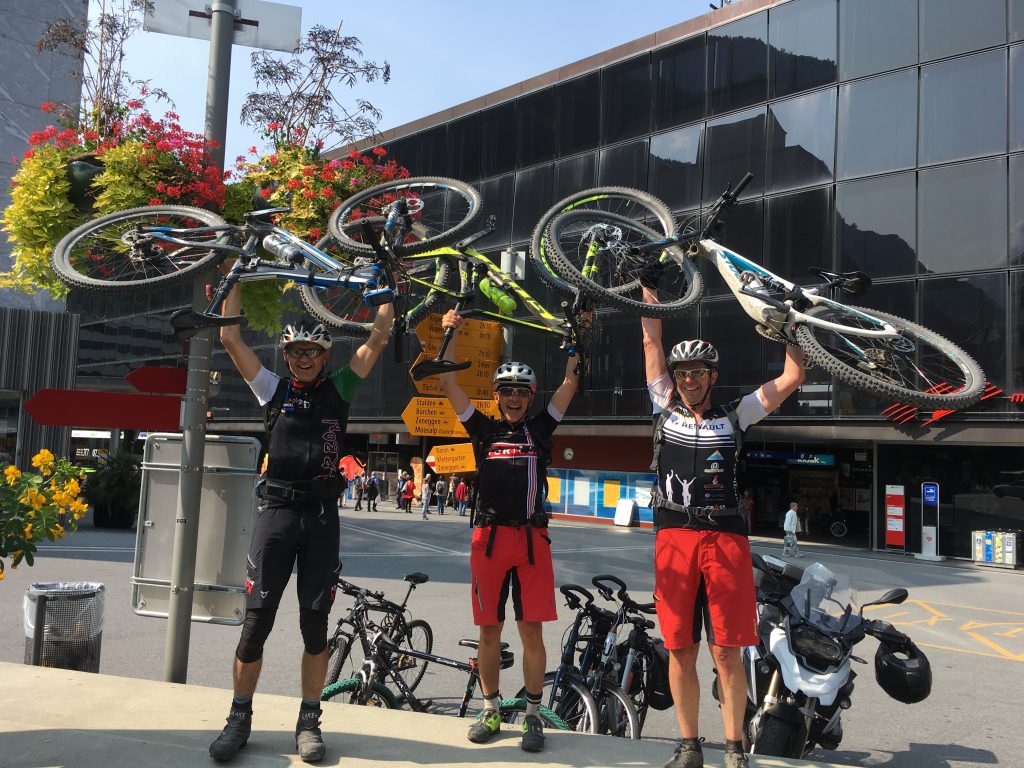 We did it! We rode around one of the most famous mountains in the world. We crossed five very high passes and felt at home outside the last seven days – what a great and indescribable week!”