The fire was roaring in the small bothy that I was sharing with four hill climbers. Winter definitely wasn’t over yet. This morning I had set out with my fully loaded bike in Dunkeld later than expected but had made it to this bothy just before sunset. One of my feet was wet after a hike a bike through the half-frozen bog, but otherwise, I was in good spirits. The newly acquired winter boots did their job well. It felt good to be out here. It felt good to be reconnecting with nature. 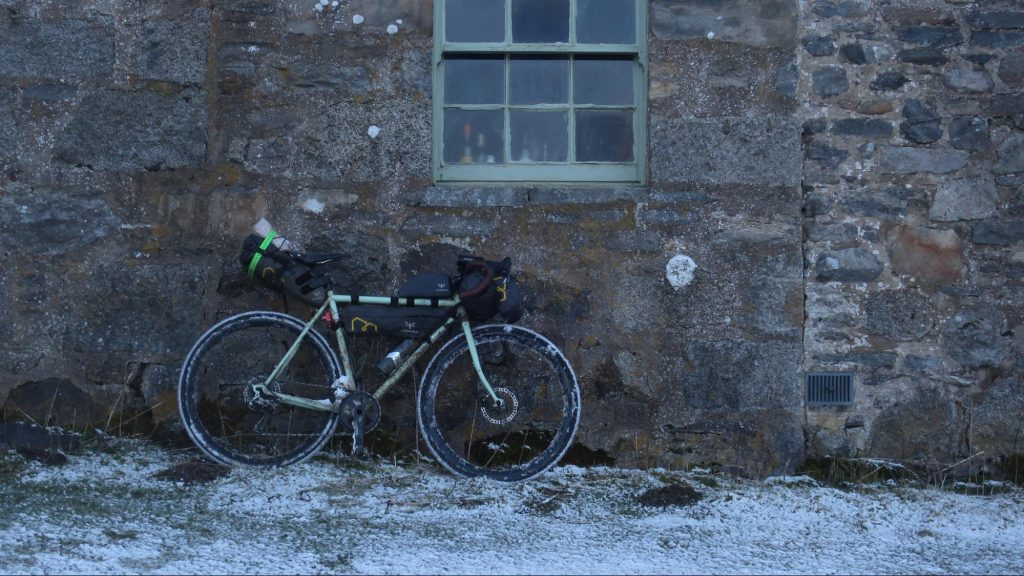 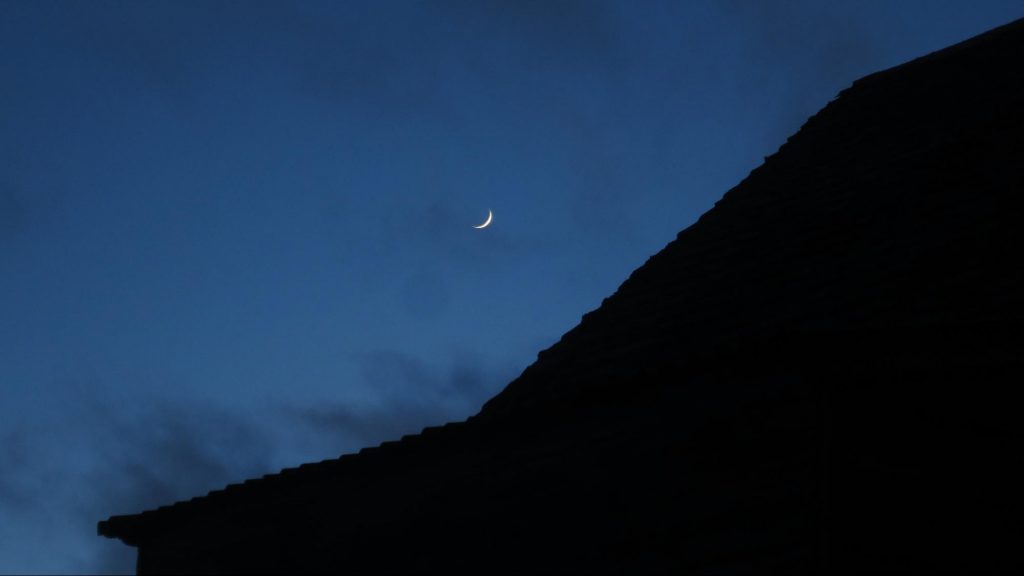 We spent the evening around the camp stove. Amongst the riders was micro adventure champion Al Humphreys and the organizers of the Wild Scotland Conference. We chatted the night away over a few glasses of red wine and whisky; something that made getting up early the following morning and leaving the comforts of a warm bed difficult. As usual, I left the route planning to the very last minute. 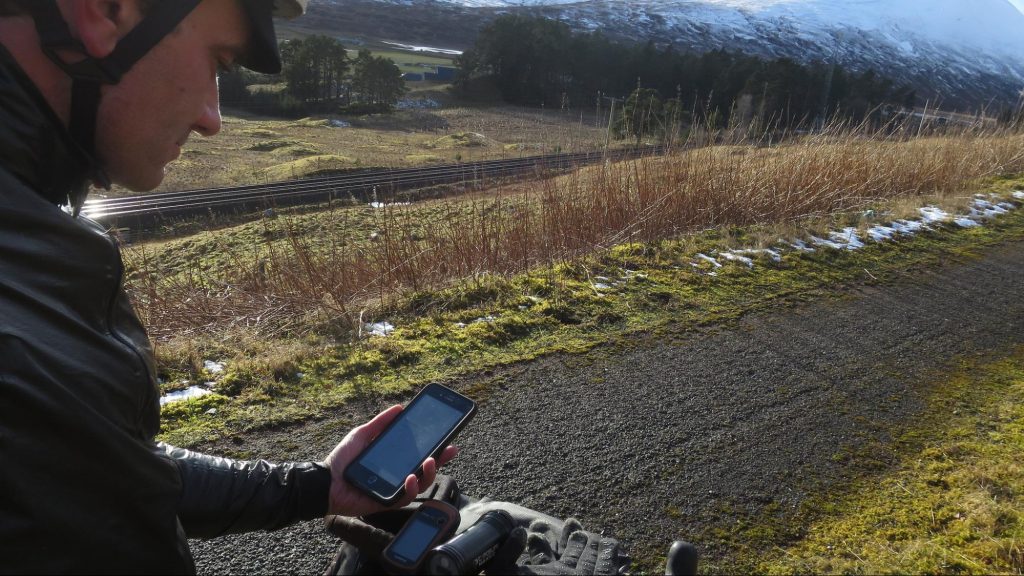 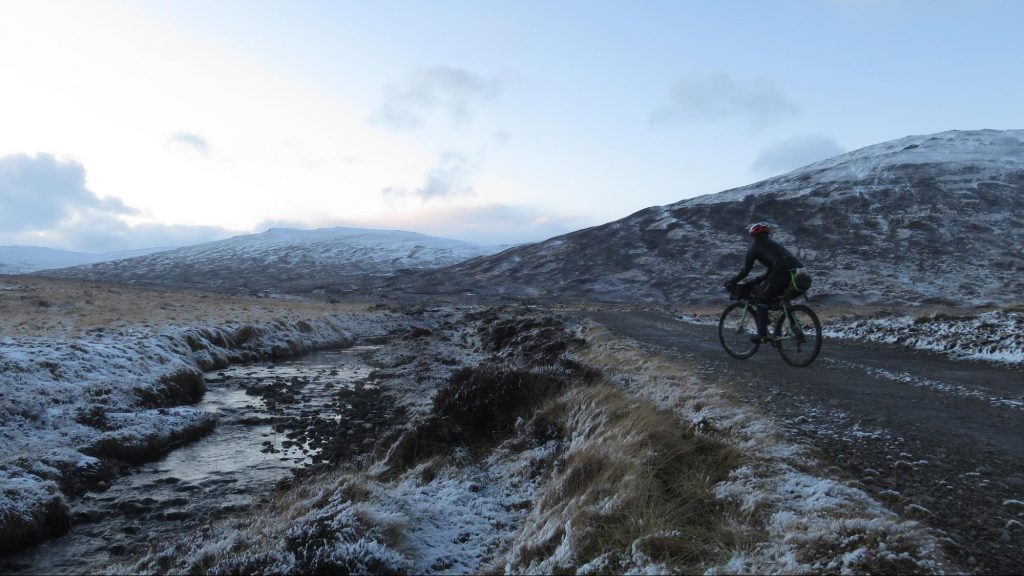 I’m Markus Stitz, originally from Germany but my heart is currently in Scotland. Its wildness, unpredictability, and openness to roam make it a never-ending playground for exploration. I’ve spent the past few years developing bikepacking trails through the country and feel deeply connected with both the landscape and the people who explore it. The idea for this trip sparked when I was invited to attend the Wild Scotland Conference in Dunkeld. It’s a lesser-known yet stunningly beautiful part of Scotland, so I wanted to take the time to explore the surroundings between the various conference days. And, for me, there’s no better way to do than being self-sufficient and on two wheels. 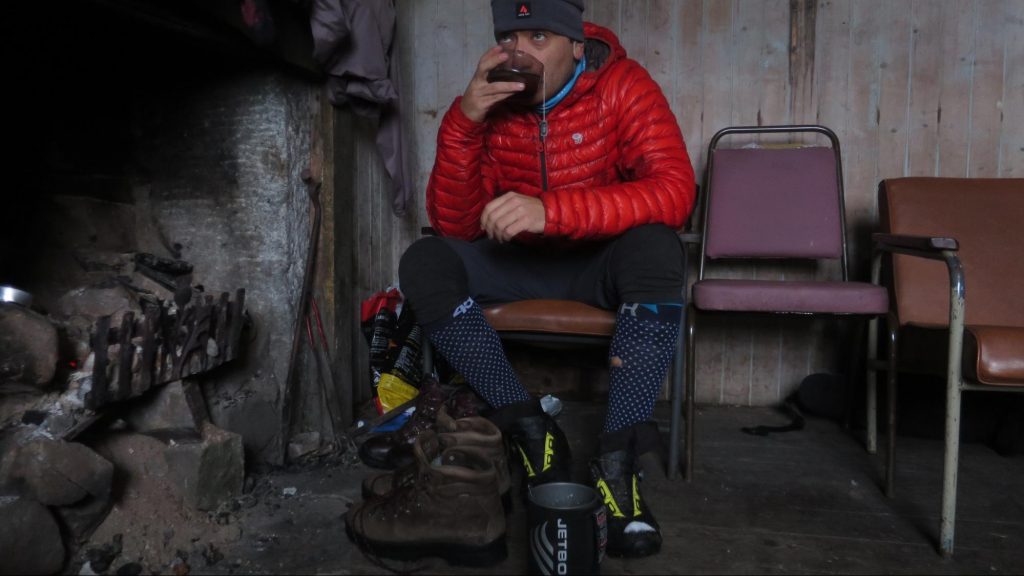 This is the first time I used komoot for planning a trip instead of just following a rough direction and seeing where I might end up. Although I was on my gravel bike, the same Surly Straggler I used for riding the Wild About Argyll Trail, I played around with its functionality. I had a start and finish point for day one and two and used the software to see suggestions for road, gravel and mountain bikes. Knowing parts of the area well, I liked komoot’s suggestions. Switching between the different komoot map overlay choices made the planning of the route enjoyable and easy. With my local knowledge, I altered the route where I wanted then once finished, I downloaded the final GPX on my Garmin. After an hour of planning and a few cups of coffee, I was good to go.

I was well prepared after the planning session with a clear idea of my route, but as always with Scotland, you can’t always predict the conditions. A rather blustery wind accompanied me all day, teaming up with frequent snow showers in the afternoon. The breakfast at Escape Route in Pitlochry and the coffee at the lovely Struan Inn lifted my spirits temporarily. But unfortunately, the wind was blowing from the direction I was heading in. It wasn’t my lack of fitness that made the ride more of a slog than expected. The Scottish weather is what it is: unpredictable. Frequently, I checked my GPS and the phone throughout the day, hoping my direction would change eventually. It finally did, but only about six miles (10 km) before finishing day one, when I finally abandoned my original plan and headed for shelter instead of carrying on further. 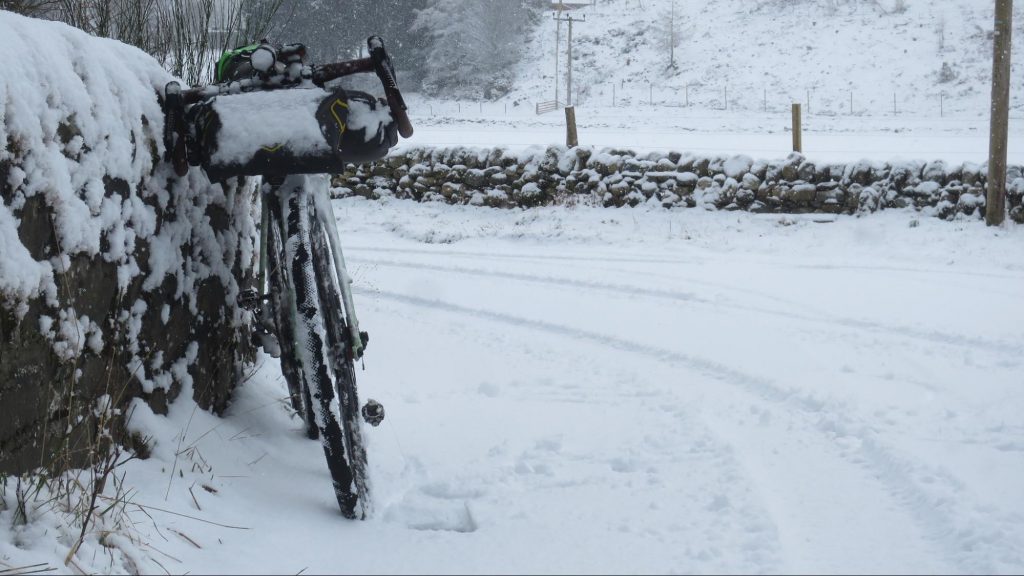 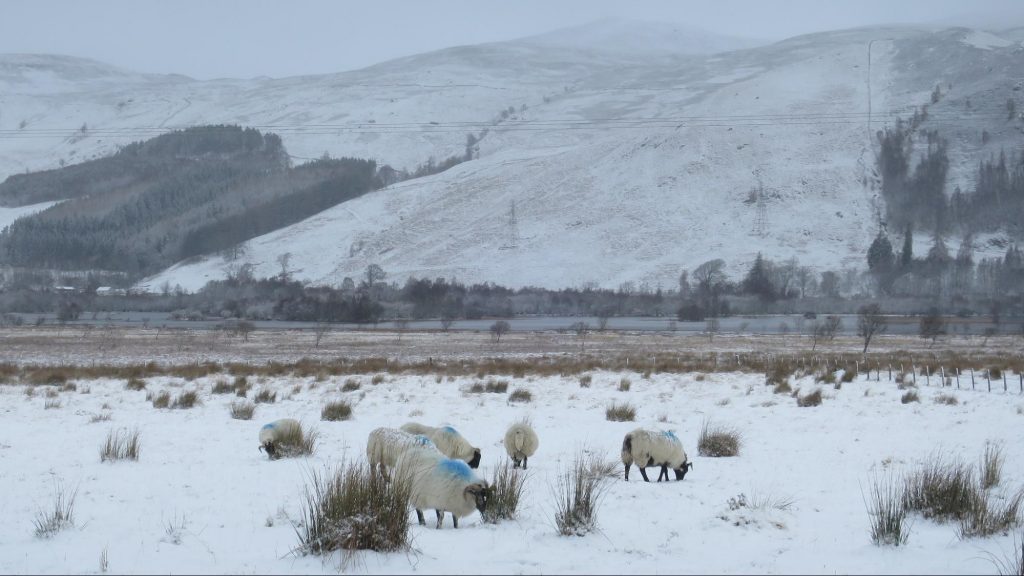 While day one had proved to be a challenge, the forecast for day two was even more challenging. A band of rain, falling as snow on higher ground, was forecasted for the morning and early afternoon. This time, the forecast was right. While it was still dry and calm when I savored my porridge inside, the conditions changed as soon as I got on the bike. Snow was accumulating quickly on the already icy paths while I battled my way through the whiteout conditions towards Kinloch Rannoch. On the exposed plateau I could hardly look up, but felt strangely alive plowing my way to the next valley.  A bus stop in Kinloch Rannoch provided a short refuge from the storm and the opportunity to change my plan. After some contemplation, I chose not to and carried on the way I had planned.

The snow got deeper on the Schiehallion Road. At the same time last year I was enjoying the warm March sunshine here before climbing one of Scotland’s most distinct munros. This time I enjoyed the fact that only one car had braved the journey on the road so far but carried on my ‘mission’. 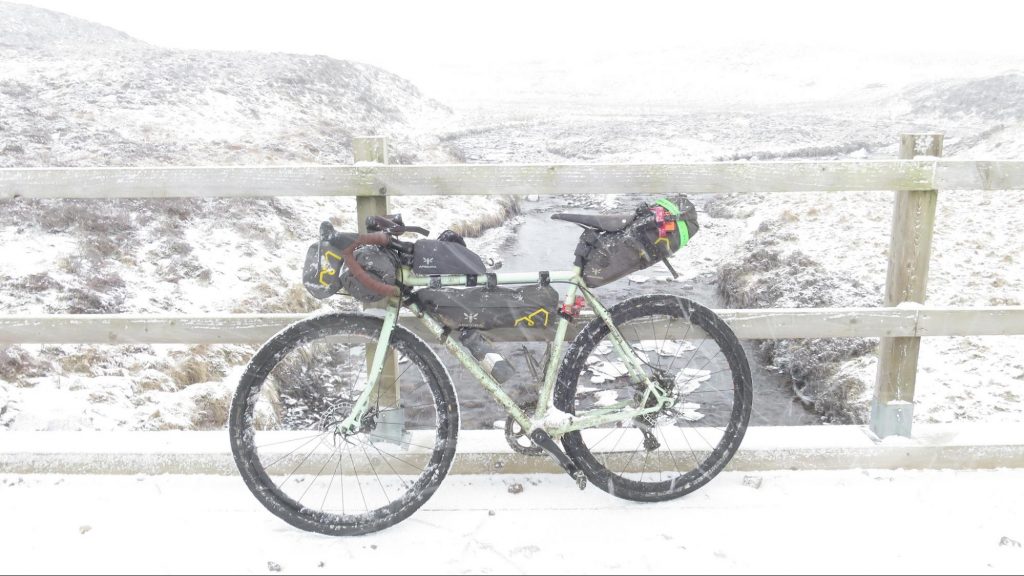 On the descent, the soft snow quickly turned into slush and rain. Now drenched, I found new motivation near Dull. Inside the café, it’s amazing the strength you can draw just from a hot cup of coffee and food. Back out in the rain, the Watermill in Aberfeldy provided more coffee and shelter from the miserable weather before the front eventually passed and finally the sun that I had been praying for accompanied me on a beautiful gravel route across to Dunkeld. Riding now there was no snow on the trail and I was soon caked in mud. It didn’t bother me at all, I had reached my destination, the train station where I would board a warm carriage and embark on the train ride back to Edinburgh. Despite the ongoing battle on this ride as to whether to carry on or call it a day and succumb to comfort, I sat on that train feeling that, despite the conditions, I had a cracking time out there riding those trails and that I was more deserving of a hot shower and a warm bed than I had been for a while. 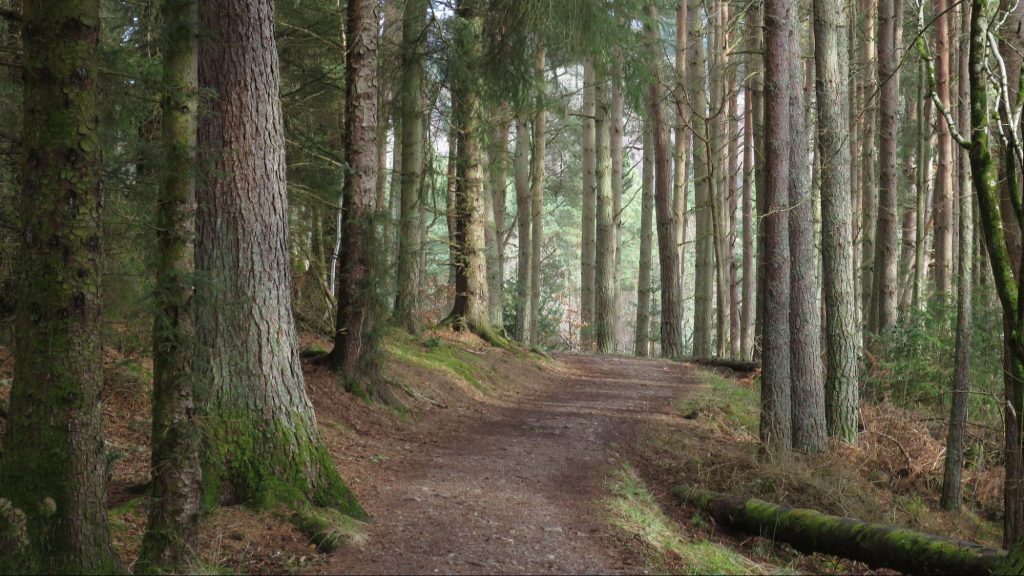 Markus Stitz has cycled around the world on a singlespeed bike and is the founder of Bikepacking Scotland.