Head First Into The Unknown: One Bike. One Year. One Continent.

A journey with the main purpose of seeing beautiful landscapes and indulge the sweet idleness – definitly not André‘s style. On his one-year trip through South America, he is putting encounters with people and personal development in the focus. After two months of pedaling, we talked to him about his experiences and life on two wheels.

Hi André! Where are you right now?
I am writing to you from Cartagena, Columbia. A city, that put me under its charm with its old city centre from the colonial times.

What are you doing in South America?
For one year, I am traveling the contintent with my bike. I started in Costa Rica at the end of April, and at the beginning of next year, I want to be in Tierra del Fuego, Argentina. For the route, I do have a couple of spots I want to see, everything else I plan on a day-to-day basis.

What’s your motivation for this journey?
I wanted to get away from my everyday life in Germany, that I know so well, and experience a culture that is new to me. In 2009, I went on a longer trip to the rather westerly New Zealand. This time, it was important to me to get to know other perspectives. In addition, I am purposely creating tasks and challenging situations with this journey, that I want to embrace and focus on my personal development. 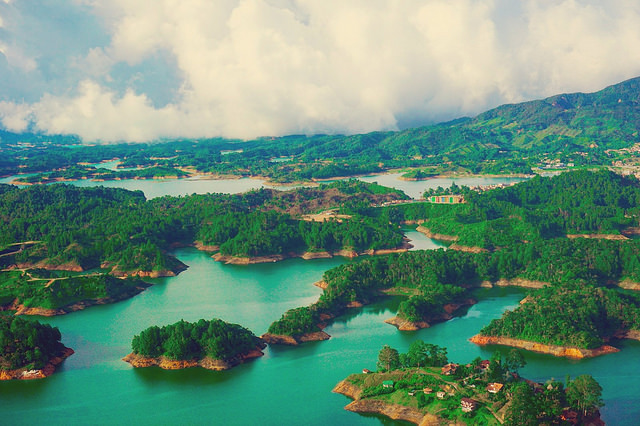 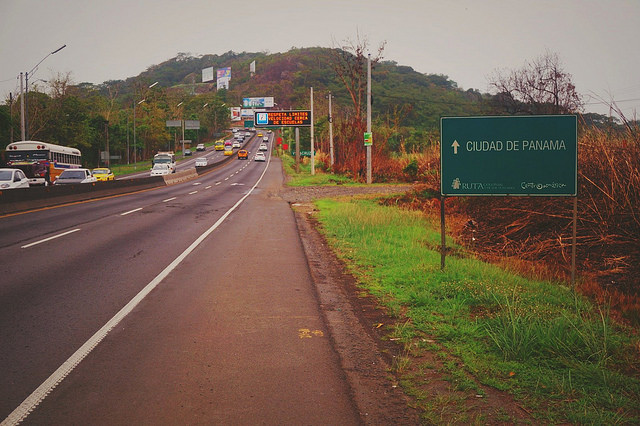 Which cultural differences have you noticed so far? Anything that impressed or surprised you?
Most people here are very friendly and open. When asked, it’s usually not a problem to set up camp in somebody’s yard. But even more than that, the people of Panama and Costa Rica even brought us drinks outside, invited us into their house and offered to use their bathroom. I am very grateful for that and happy about this hospitality. It also feels good that everything is moving at a slower pace here, even though it took me a while to get used to.

On the other side, I have noticed that there’s much less awareness for certain topics.A very big issue here is trash, that is lying around at the beaches and the sea. In stores, everything is automatically put into plastic bags, sometimes even in two. And even when I note that I don’t need one, people will forget a second later. Furthermore, the consumption of meat is conspicuous. Quite often, as a vegetarian, you won’t find anything to eat but rice and salad. 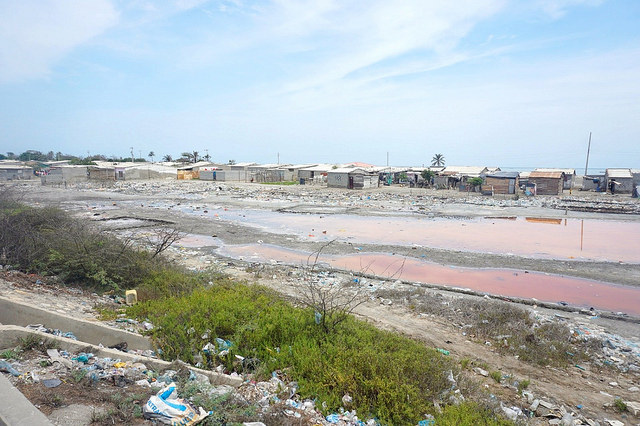 What was the most beautiful moment of your trip so far?
Regarding locations, crossing the Puenta de las Américas bridge into Panama City and the old town of  Cartagena were two highlights. Bathing in cool rivers, surrounded by the jungle, looking at a waterfall was so beautiful. Talking to a handful of very special people has been a personal gain, too. 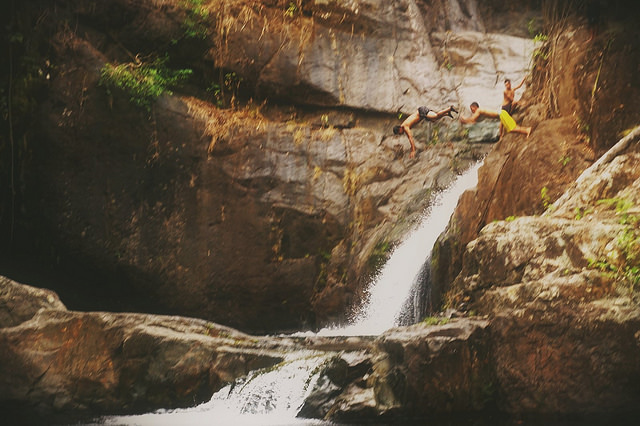 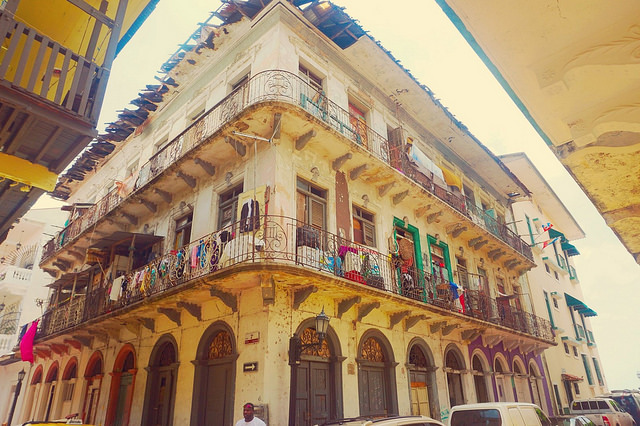 You only travel by bike. How and where do you sleep?
That’s different from day to day. For the most part, I am camping, but I have also made great experiences with Couchsurfing and Warmshowers. I am consciously traveling on a low budget, to distance myself from the material abundance of the western world, to lower my life standard and focus on the essential needs, which tend to get lost in all that wealth. 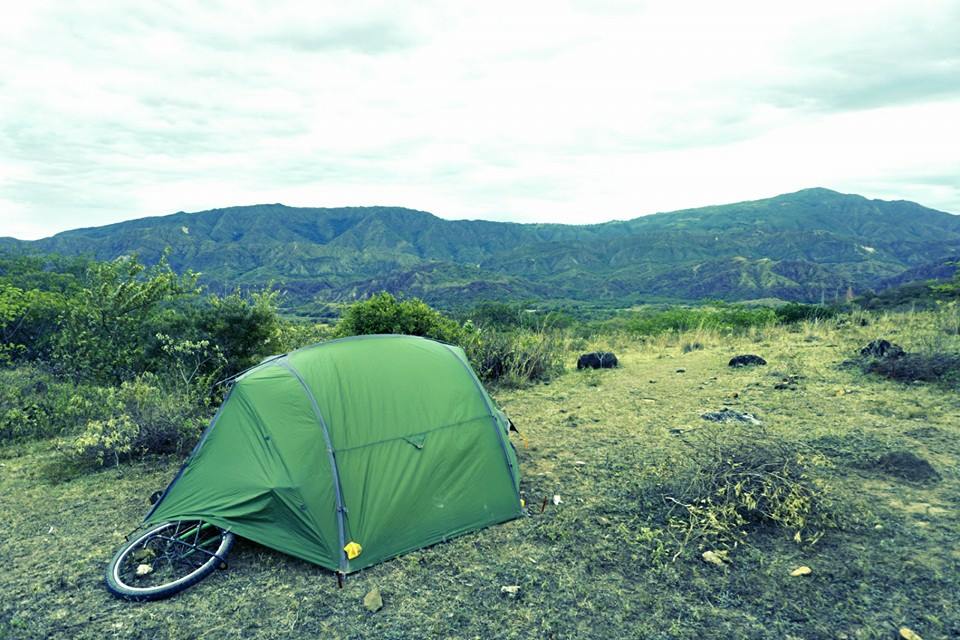 What did you bring?
First of all, my bike, which I personally assembled, in order to be able to repair it in an emergency. Then my tent, sleeping pad, sleeping bag, stove, tools and a couple of spare parts. Choosing functional clothing was hard, since they tend not to be the prettiest. In the end, I went for an in-between of pieces of clothing that look okay but still are functional, for cold and warm weather. All in all, my luggage weights 27kg. 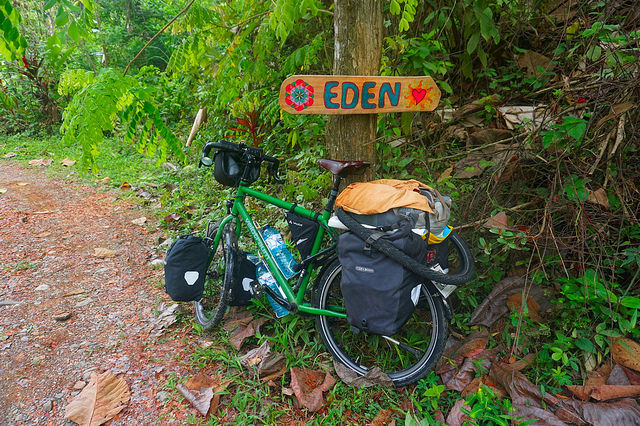 Are you traveling by yourself?
Long before I flew over here, I asked people in my closer surroundings if they wanted to join me, but couldn’t find anyone who liked the style of traveling and was free during the same period. So I searched for travel mates on the internet and found two people, who had a similar idea in their head. It was risky of course, because we didn’t have much time to get to know each other. How do you know if you’ll get along on a long and intense trip like this? We went on smaller tours in Germany, one two-day trip around Stuttgart, another from Stuttgart to Hamburg, which we also used to test our equipment. For the first couple of weeks, I was traveling with Paula, but since we didn’t harmonize, I soon was pedaling by myself again. Since the middle of June, I’ve been traveling with Tobias, who will accompany me for a couple of months. 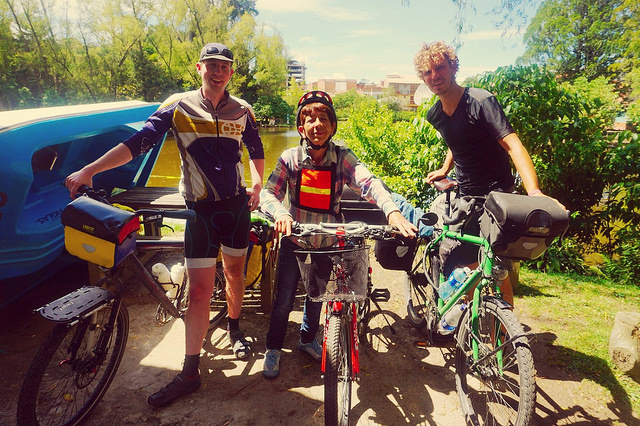 One year is a long time. How did you manage that job-wise?
I studied electrical engineering and have been working as a project manager in a service company of the automobile industry for almost three years now. When I told them about my wish to go on this trip last spring, my boss supported my idea, even though he rather would have liked to have me there. We agreed on a sabbatical, so I could leave after saving up for twelve months. My salary was split evenly into the saving and traveling periods. 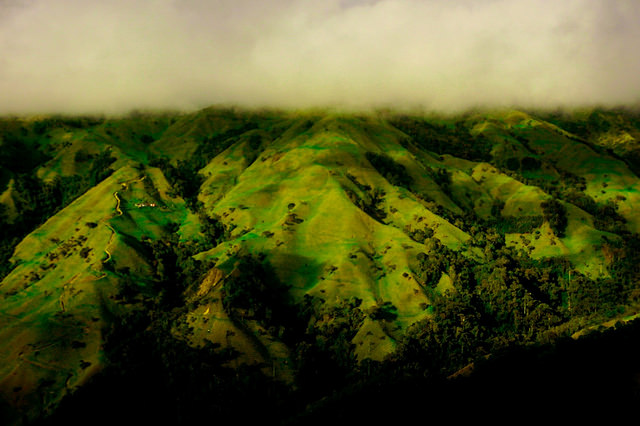 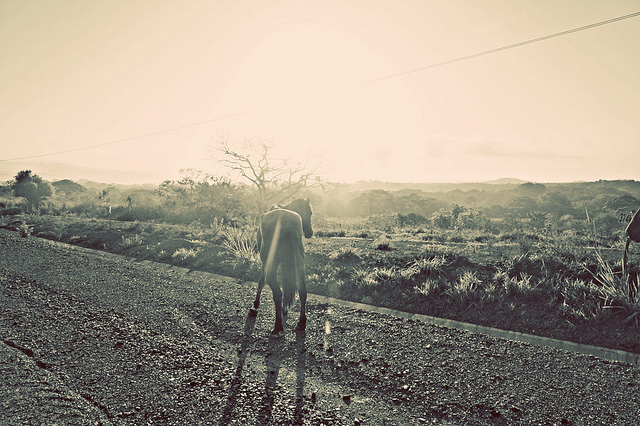 How do you decide where you go next? How do you plan your actual routes?
Usually, I am deciding where I’ll go the day before. It depends on how many kilometers and altitude I can and want to make plus, an important factor over here, on the conditions of the roads. Sometimes, a street will mostly be descending, but it still takes ages to make any distance and riding is exhausting, because it is full of big rocks and holes. Komoot has been a big help for me, in order to plan realistic and good routes. 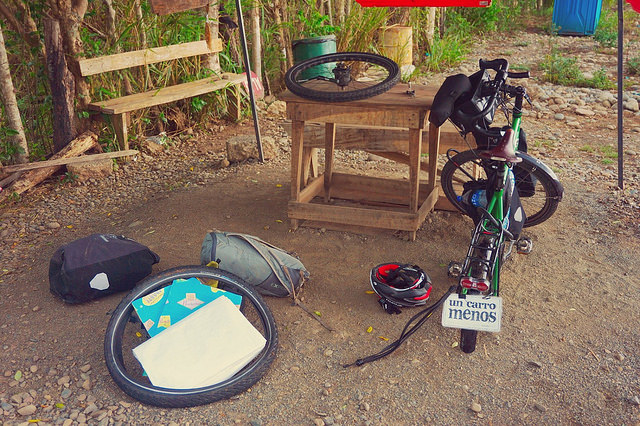 What do you do during those looong rides?
Mostly, I just watch my surroundings, which can be more or less exciting. And of course, I have many thoughts running through my head. When I have the opportunity, I’ll listen to some music, sometimes as background music, on other days for motivation during steep climbs. In the last couple of weeks I discovered some podcasts for me, with background knowledge about what’s happening in the world, travel podcasts about places and regions along my way as well as language training to improve my Spanish. I also listen to podcasts that are pure entertainment, which sometimes make me laugh out while I am sitting on my bike.

Now, honestly, how often do you get to shower? Have your hygiene standards changed?
It definitely changed, but mostly it all works out well. Of course I’ll crawl into my sleeping bag without showering every now and then, or have to take a cold shower when the temperatures are low. That makes a bathrooms with hot running water in hostels or at our hosts’ almost feel like a little oasis. Beard trimming has proven to be rather difficult without an electric trimmer, but I have developed a method to shorten my beard with a wet razor, while not shaving it off completely. 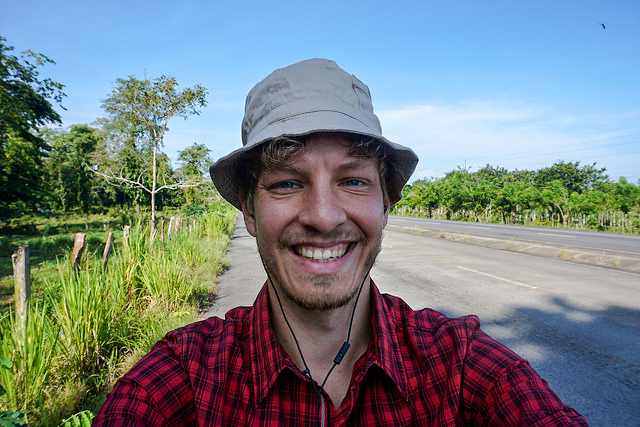 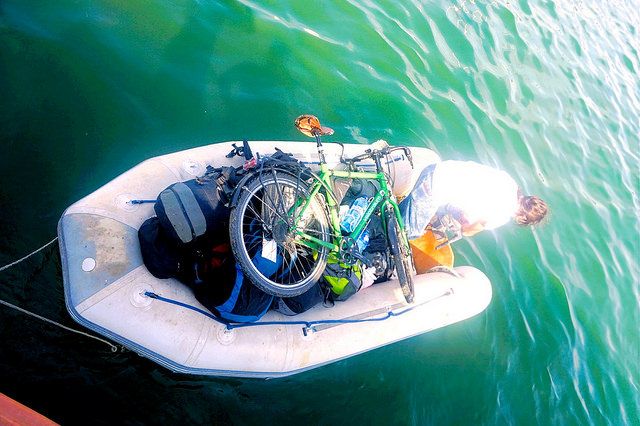 What are your expectations for the rest of your trip? What are you looking forward to?
Most important, I want to make as little plans and have as little expectations as possible, but rather see what will come and be able to react flexibly. But of course, I am excited to see what this trip will do with me, what I will be like when I get back, whether I think or behave differently. I am open to all the impressions and anything that will come. I want to have fun, meet people, have deep conversations. That’s why I learned Spanish, so I can talk more than just order food.

And where are you heading next?
Next, I’ll go to Santa Marta, the first Spanish settlement on the South American continent. After, I’ll go to Medellin and then bike  further South.

Thank you, André, for the nice chat. Have a great trip and many grand and interesting adventures.

You can find out more about Andrés journey on komoot and on his blog,  where he regularly writes about his experiences: radrauschen.wordpress.com

If you were just infected by serious wanderlut, make the first step and plan that Tour on komoot now.