An insight into Audax

We are all familiar with famous professional bike races such as the Tour de France and the Belgian Spring Classics. On the competitive amateur circuit, however, most people participate in sportives — bike challenges, often big days in the saddle, with plenty of climbing and a large field of cyclists giving you the chance to test your legs and, if you get a chance to look around, take in some of the often beautiful scenery. But how about randonneuring? Or audaxing as it is more commonly known in the UK, Australia, and Brazil?

Audaxes are for the explorers among cyclists; they are events for the adventurous cyclist who loves to push his or her limits over distances most would shy from. They are aimed at cyclists who ride to discover places off the beaten path to feast on isolated vistas and to meet like-minded riders. Of course, stopping at the odd cafe that dishes up hearty, local fare is also part of the attraction.

The audax scene is a growing niche within the world of cycling in which riders challenge themselves to cover long distances within a time limit. Each route is split up by a number of mandatory checkpoints called “controls”, where the “randonneurs” (riders taking part) must get their brevet card stamped to validate that they have been there. “Long distance” can mean anything from 100 kilometers (60 miles) to well over a thousand, and once you’ve started, it’s easy to get hooked! 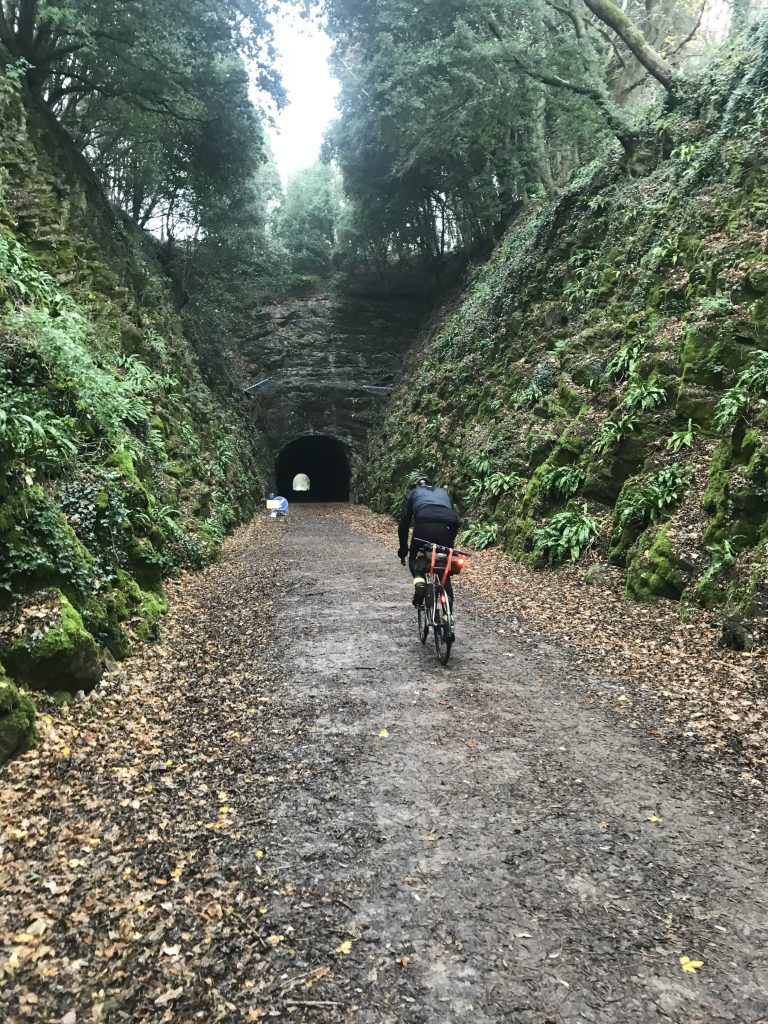 We chatted to one of your pioneers, El, who is already hooked on big miles, to get an insight into a recent audax event she took part in. To add to this particular challenge, the event took place through the night.

“Recently, Will Pommeroy of Great Western Randonnees (#GWR) organized an event with a twist: a 300 kilometer (186 miles) Audax starting at 10 pm in November. He originally planned the ride to start at his house in Bristol, anticipating only a handful of eager riders. When over 70 hardy souls signed up, he had to have a rethink!

“Just after 10 pm we were off: a long conga line of riders passing overflowing pubs, dynamo lights dancing of reflective clothing on our very own rolling-disco to the seaside.

The night start meant that we had the roads all to ourselves. Fast A roads that would have been a no-go during the day were transformed into empty tarmac rollercoasters. Sat in a strong group, I enjoyed some shelter from the wind whilst the miles passed almost effortlessly. The first control, the Moonrakers pub in Devizes, presented a classic audax juxtaposition: inebriated locals danced on the pool table whilst the high-vized cyclists tried to find the control point without being noticed. Card stamped and a few homemade mince pies later, we set off to the next control and the promise of caffeine. 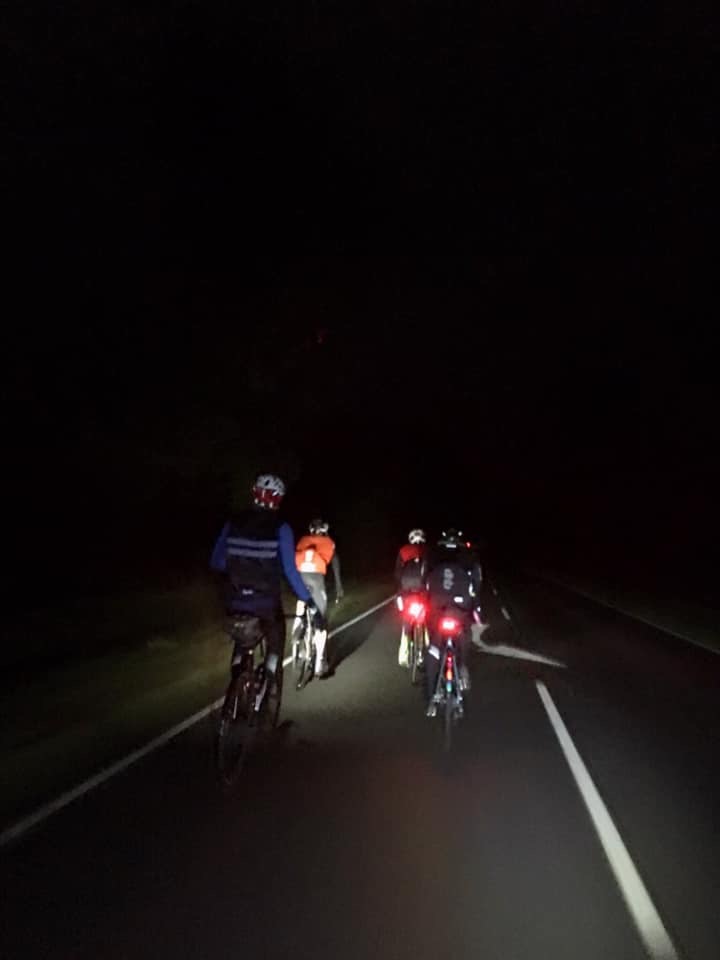 Onwards to the seaside! Along the Bournemouth seafront, we kept the sea to our left as our bikes picked up some sand, salt, and strange noises. Luckily, the rain wasn’t far away to wash it all off. Inside a scout hut, Will and his merry band of helpers had laid out some treats for weary cyclists: a cooked breakfast with jacket potatoes! The high from breakfast lasted all of 30 minutes before my legs and stomach started to fight each other for blood supply. Unfortunately, this coincided with riding over the Dorset hills!

By now, I was starting to feel utterly tired and really wanted the sun to come up and help me escape the looming sleep monster. As dark grey faded to light grey, it slowly dawned on me that the heavy drizzle and cloud meant that this was as light as it was going to get! Oh well. Despite our slower progress, we reached the 24-hour service station at Podimore for some overdue coffee and a sausage roll. Audax certainly knows how to do gourmet cuisine! 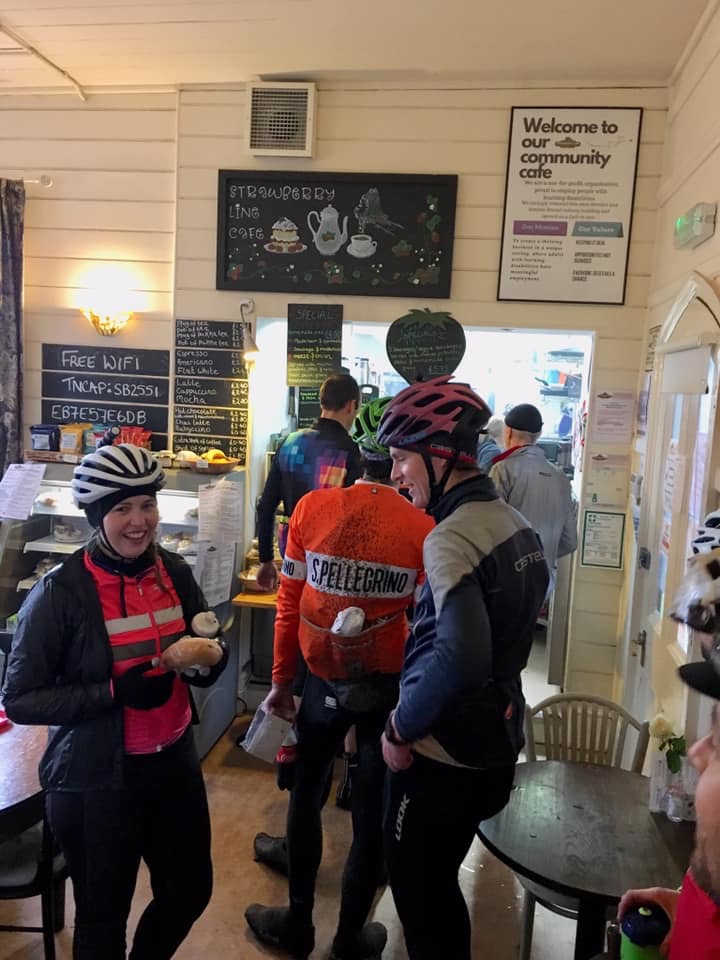 Lots of riders were starting to feel the tiredness, but being back on familiar roads around the Somerset levels (a coastal plain and wetland area of Somerset) meant that spirits were high. The energy-sapping wind on the approach to Glastonbury threatened to take that away, however. As the rain drew in, we hit the Strawberry Line, a gravel cycle route to the final control point at Yatton station cafe. Wet leaves clogged our mudguards, adding to the punishment already inflicted on our bikes by the sand at the coast. We arrived at the control point in dribs and drabs, but left as a big group, determined to cover the final stretch into Bristol together. After such a peaceful overnight ride, the noise and aggression of the city traffic felt pretty alien. We reached at the finishing point in time for a late lunch, cooked up by Will, once again on hand to replenish tired riders’ energy stores. The chat, subdued these last few hours by the drizzle, picked up voice. Some riders had loved the route and night riding, others dismounted their bikes and vowed never to talk to Will ever again! That’s Audax.”